BEER WITH A SOCIALIST: Bell's Two Hearted Ale is an iconic American classic. 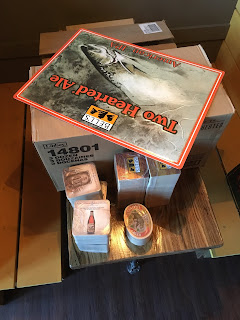 Having resolved to devote a permanent tap for Bell's Two Hearted Ale at Pints&union, I became curious and a tad nostalgic.

When was this tasty mainstay first brewed?

It seems as though Two Hearted has been around forever, but the answer is the year 2000.

“I think the Midwest has a great finesse for balance in IPAs,” (Laura) Bell says. “The West Coast tends to put the bitterness upfront. Two Hearted looks outside of the hops for other characteristics. It’s not just about having the assaulting bitterness on your tongue. I want to be able to drink and IPA and say, ‘I’ll have another one.’”

The Centennial hop has been around since the mid 1970s, but wasn’t widely used when Bell’s decided to make it the sole varietal in Two Hearted. “I think Centennial has these very piney, grapefruit and floral flavors and aromatic qualities.”


It's my recollection that we first poured Bell's Two Hearted Ale at the Public House around 2002. It was among the first regional IPAs we could get on a dependable basis at a good price point, and Centennial hops were a big deal at the time. In my world, they still are.

From the start, I was drawn to Two Hearted Ale for literary reasons. It's no longer fashionable to profess interest in Ernest Hemingway's writing, and so as a practicing contrarian, I persevere with Papa.

The river is a popular destination for recreational fishing. As such, it was the title of a famous short story, "Big Two-Hearted River", by U.S. author Ernest Hemingway. Hemingway used the name because of its appeal; however, the geography of the story indicates that Hemingway was really describing a different trout stream, the Fox River near Seney. The story, set after World War I, was first published in 1925 as part of the collection In Our Time and republished in 1972 as part of The Nick Adams Stories.


Sensibly, the beer from Bell's was not named for the Fox River, although it wouldn't surprise me if another brewery might have tried making Foxxed River Ale at some point.

The word "iconic" is overused, but I'll argue strongly for its appropriateness in the instance of Bell's Two Hearted Ale.

Brewed with 100% Centennial hops from the Pacific Northwest and named after the Two Hearted River in Michigan’s Upper Peninsula, this IPA is bursting with hop aromas ranging from pine to grapefruit from massive hop additions in both the kettle and the fermenter.

Perfectly balanced with a malt backbone and combined with the signature fruity aromas of Bell's house yeast, this beer is remarkably drinkable and well suited for adventures everywhere.


Obviously I'm a fan of Bell's and its founder, and cherish the opportunities over the years to chat with Larry, especially the time we enjoyed a lengthy digression into Russian history with two or three of his beers at the Eccentric Cafe. When the Cubs won the World Series, the first name to pop into my head was my old friend Bob Gunn (also a Hemingway aficionado). The second was Larry Bell.

Here's a recent article about Larry, Laura and their brewery's progress, followed by an observation.

... Today, (Larry) Bell remains at the helm of the company.

His daughter, Laura Bell, served as CEO for more than a year until she stepped down from the position in May and the company is not planning on hiring a new CEO at this point, Bell said. Laura Bell remains a shareholder, he said.

"I continue as I have always been since day one, president of Bell's," he said. "In essence, the buck has always stopped with me and that's how it continues to be ...


In closing, consider this.

Two Hearted is Bell's Brewery's top seller, Bell said, and if the beer was its own microbrewery it would be the 13th largest in the country, he said.

In Michigan in the summertime "Oberon is rocking it," he said, and Amber Ale, which helped build the business, continues to be the third most popular beer.


If you were contemplating a bar or eatery in a place like New Albany, and these three beers from a famous craft brewery are its best sellers nationally, why wouldn't you pour them all the time (rotating Oberon in the off-season, and maybe adding a fourth non-rotating Bell's tap) rather than constantly flip through the catalog?

You'd be known as the Bell's bar in town.