The financial and tariff barriers embodied by Ohio River toll bridges, and more dull silence from the oligarch fluffers. 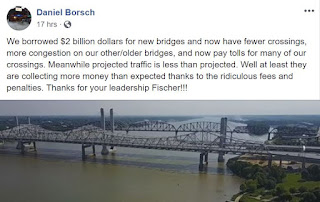 If you're surprised by these statistics, let's have coffee. I have bridge futures to sell you.

Traffic has soared by 75 percent on the region’s oldest bridge, the Clark Memorial, since drivers started paying to cross the river.

So far: Less traffic across the Ohio River.

Fewer vehicles are crossing between Kentucky and Indiana since tolls were added to bridges between Louisville and Clark County, Ind., according to a preliminary report obtained by WDRB News.

The two state governments have not publicly released the study, a requirement of the Ohio River Bridges Project. But the draft version provides a first look at how drivers are responding to paying $2.05 to $12.30 to cross the river.

The traffic counts indicate that drivers apparently seeking to avoid tolls are flocking to the region’s oldest span – the 1920s-era Clark Memorial Bridge – in greater numbers than previously envisioned.


Unfortunately, the bridge in question is ours. A little more than two years from now, it's going to be closed for a lengthy period.

The Sherman Minton, which connects Louisville and New Albany, Ind., carried 90,000 vehicles in 2018, a 23 percent climb from 2013. It is the only toll-free interstate bridge in the Louisville area.

Indiana is planning an $80 million upgrade on the Minton in 2021, making structural repairs and doing other work meant to make the 56-year-old bridge safer. The span is expected to close for months.

In June, the Minton was reduced to one lane after a hole in the road surface opened and forced emergency repairs. The Indiana Department of Transportation has yet to fulfill a WDRB News public records request, submitted June 18, for the bridge’s recent inspection records.


In fact, I've nothing bad to say about Deaf Gahan in this regard. Granted, Gahan hasn't said the first word publicly about contingencies and coping mechanisms for 2021, but it probably won't matter because he won't be mayor any longer.

But it's important that someone begin thinking about this, and the Sherman Minton's 2021 repair closure absolutely has to be a campaign issue for mayoral and city council candidates in 2019 -- and since it's going to be equally important for every resident of Floyd County, cooperation between arms of government must be part of the coping equation.

Meanwhile, the oligarchs seem to be choking on the fruit of their megalomania.

The metro area’s chambers of commerce – Greater Louisville Inc. and One Southern Indiana – backed the project and were members of The Bridges Coalition, a collection of business, labor and government groups that lobbied for the work.

"That said, we do believe that the construction of the two new bridges and the rebuild of the downtown interchange has provided new opportunities for economic growth and commerce on both sides of the river," she said.


Speaking of pure evasion, 1Si stares at the ceiling. Are any arts or humanities majors available to interpret Dant Chesser's intentional omissions?

Wendy Dant Chesser, president and CEO of One Southern Indiana, noted in an email that the report doesn’t provide any insight into economic growth and declined to comment in detail.


Ah, but the guy from Ogle gets it.

Kent Lanum, President and CEO of the Jeffersonville, Ind.-based Ogle Foundation, also said the study doesn’t explain what is contributing to the reduced traffic, but it raises concerns nonetheless.

“What was once a cultural and historical barrier for our region to kind of get across between Southern Indiana and Kentucky is now more of a financial and tariff barrier,” he said. “And people are acting with their pocketbooks.”