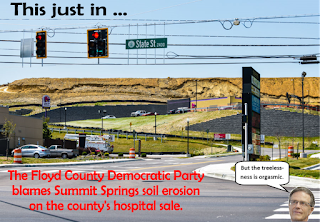 They're the ones who can't afford to play the game -- right, Scott?

Did the developer of Phase 2 at the Summit Springs Luxury Mudslide Strip Mine Fun Park violate a cease and desist order yesterday?


If isn't as if we don't know which side the city's on. Hall himself probably wrote the press release about Team Gahan partnering with Kelley Greed Inc. on this bountiful environmental catastrophe.

As such, does anyone really think the city is interested in the enforcement of agreements and covenants when it'll be primary election day, like, tomorrow?

Work is happening in phase 2 of Summit Springs. Should it be? by Danielle Grady (Tom May's Rolltop Desk)

NEW ALBANY — A neighbor of Summit Springs in New Albany is worried that the developer is overstepping boundaries by working in an area of the project that hasn’t received city approval, but the project’s team says that they’re doing everything according to plan.

Summit Springs IN LLC was sent a cease-and-desist letter from New Albany’s plan commission director Scott Wood after workers began clearing trees in April for a new water line that will connect to a hotel.

The letter called for the halting of "all construction activities" in the phase two area ...