BEER WITH A SOCIALIST: "One German pub owner is still serving at 87."


Clocking in at a mere 12 minutes, this is a gem of a brief Deutsche Welle news profile, or perhaps a mini-documentary. Surprisingly layered, little bits of the story keep emerging as Hildegard Schweinsberg works a Thursday at her pub in Neuhaus, near Schwerin on what would have been the DDR side of the border during the period of Germany's division.

To me, this fact is very relevant to the story. As we know, Frau Schweinsberg likely wouldn't have been the owner when she started serving beers. She'd have been a manager, paid by the state.

One of the main tasks in the transformation of the East German economy was privatisation. In the German Democratic Republic (GDR), in accordance with the to Socialist creed, there was virtually no private property or means of production.


Did Frau Schweinsberg purchase the pub and hotel business during the privatization phase? Ironically, she observes that it's been thirty years since she drank on the job -- roughly the same time the Wall fell.

The regular crowd shuffles in. A coffee, or a sausage and a Lubzer Pils. Maybe a cheap Euro glass of schnapps. I highly recommend these short, worthwhile, elegiac minutes with the keeper of a tradition.

One German pub owner is still serving at 87 | DW Documentary 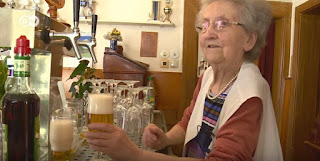 At age 87, landlady Hildegard Schweinsberg is still behind the bar every day. Her pub "Zur Börse" is the heart and soul of the small village of Neuhaus. People meet here to drink, relax and catch up. What will happen if this tradition dies out?

A church, a cemetery and a pub surrounded by fields and forests - the scene of a typical, idyllic German village. But it's becoming increasingly rare. Many people are moving to the cities, and in the villages there are fewer places to meet and catch up. The pub has always been an integral part of country life, and for one lucky village of 1500 people, it's still a thriving tradition. In Neuhaus on the river Elbe, Hildegard Schweinsberg has been running "Zur Börse" for nearly 60 years. And at age 87, she still can't imagine ever giving up, despite often needing a walker to serve her customers. And there's no one to take over anyway. A report by Linda Vierecke.