Let's talk about the 8% and their affordable slots in the 14-story luxury middle finger high atop Summit Springs. 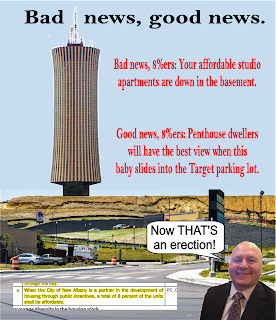 You probably remember this.

NEW ALBANY — Plans to start a phase two of the Summit Springs commercial and residential development are not detailed enough for New Albany’s plan commission yet. At a Tuesday meeting, the voting body tabled requests by the developers to consider plans for a 14-story residential tower and more on top of a hill overlooking State Street.

The developers hope to sell the condominiums in the residential tower for prices starting at $250,000 and costing as much as $1 million for the penthouse, said David Ruckman, who is a land surveyor working on the project.

As for the sliding, a geotechnical study conducted for an original iteration of the project read at the meeting by a resident, says that the slopes in the area are only marginally stable. Ruckman acknowledged that there could be sliding on slopes, but only if they’re not maintained. Summit Springs would maintain the slopes in several ways, including a property owner’s association, he said.


But you may not remember this, as written in the city's newly minted comprehensive plan.

From the moment Team Gahan switched sides and triumphantly announced the city's partnership with the Kelley Greedniks for the development of a purely inappropriate hilltop, Dear Leader's propaganda ministry has been crowing about this marvelous public-private partnership.

Have there been public incentives and subsidies involved?

Look at it this way: the city is paying for the road, and short of a privately financed gondola, there can be no hilltop strip mine development without a road past the white elephants (I mean, bison) to the, er, summit.

Want to bet the city's own 8 percent rule won't apply to living spaces within the Gahan Memorial Tumescence Tower?