This letter is so poorly written that maybe Duggins actually dictated it. 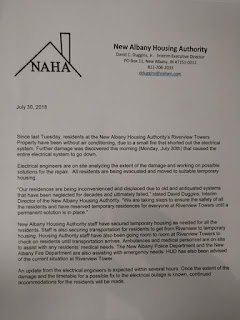 This is David Duggins' second summer in charge of the residences (or is it "residents"?) at Riverview Towers (but maybe it's "Tower," singular).

Seems he would have known about "old and antiquated systems" all the way back in 2017.

If he did know, why wait for these systems to collapse before doing something?

If he didn't know, then isn't $125k per year a bit much to pay in salary to someone to be reactive rather than proactive for the sake of political propaganda when the well-being of residents (not residences) is at stake?