Dan Coffey wasn't making it up: 500,000 truck trips would be necessary to remove Duke's toxic coal ash from the Gallagher plant's ponds. 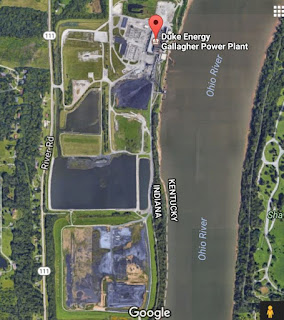 At June's second city council meeting, 1st district councilman Dan Coffey raised an important point about Duke Energy's Gallagher power station, which has been burning coal ever since its four units were built during the period 1958-1961.

Coffey warned against Duke shirking the clean-up of highly toxic coal ash, and also mentioned that removing the coal ash might require 500,000 truck trips over a period of years.

There were guffaws and the rolling of eyes, but Coffey was right. Here's the source from May, 2017. Did you read it? I didn't. Tim Maloney is the Hoosier Environmental Council Senior Policy Director, and Duke Energy's spokeswoman is Angeline Protogere.

... "For all these old coal-fired power plants, the real question is what happens to the waste, and is that handled in a responsible way?" Maloney said. "Leaving it sitting there next to rivers and atop shallow groundwater systems, in our view, is just the least desirable option."

But Protegere said removing much of the 9.3 million tons of coal ash at Gallagher Station from ponds would require 500,000 truck trips over the next few decades. Closing ponds in place takes "months or years," she said.

"Obviously that has a major community impact and a significant amount of truck emissions," Protegere said. " ... There are a number of factors that go into this decision."