If you're on Twitter and aren't following Hon. Deaf Gahan, go there immediately and enjoy the shadow mayoral account.

Thanks for reading NA Confidential, where we enjoy reconnoitering the neglected periphery for uniquely local perspectives on life in New Albany.

The June list begins with five "honorable mention" posts, before concluding with the Top Ten, escalating to No. 1. These statistics are derived from Google's internal accounting.

As an aside, never before has an ON THE AVENUES column finished as the top post of the month.


Goodbye to the Fork in the Road, hello to "Mayor Jeff Gahan presents, "A Fork Amid the Sidewalk" -- and fork YOU if you don't obey.


Jeeebus, the clique is engorged. Anyone for lancing the boil in 2019?


Jeff Gahan handed Denton Floyd $750,000 to kick-start the Reisz project. Where are the documents detailing this transaction?


Gibson told councilmen that if the city’s back-alley deal with Denton Floyd falls through, there are no other choices aside from demolition. Either the city spends a minimum of $10,000,000, or there’ll be a hole in the ground. Anyone listening to Gibson should have asked a simple question.


In turn, this means that once again -- have we reached 50 times yet, or 75? -- David "I'm Beaming About Buildings" Barksdale of the largely fictitious Treeless Board is merrily presiding over the felling of at least seven healthy trees, proving yet again that irony in New Albany is stone effing dead -- and moreover, with Barksdale the council swing voter of the moment, he's buffed to a high sheen by the City Hall patronage machine and encouraged time and again to lube the chain saw as a means of glorifying objects, as opposed to people.


First Taco Walk, now 1 Night Stand. It's not derogatory to suggest that no idea is safe from being hijacked by Develop New Albany.


The reason why I don't write fiction is that real life is endlessly bizarre, so let's take a look at the next purloined event from the foot-shot specialists. It's called 1 Night Stand, and if this term sounds weirdly familiar to you, keep reading.


"What and who is New Albany Social?"


Kelly's and Beth's grassroots enthusiasm is contagious. It's pleasingly non-corporate, and comes spontaneously. What they're doing is great, and let's hope for many more posts.


Neither City Hall nor HWC Engineering sees a problem with this mishap-plagued intersection. Maybe we should appeal to Floyd County government for help.


To no one's surprise, BOW has been completely unresponsive -- and as fatigued city engineer Larry Summers informed council just a few weeks ago, he's so busy coordinating campaign donations from paving companies that there's no time for the consideration of other matters. Unfortunately, Greg Phipps has a history of stopping short of useful action that might offend Dear Leader, so here we are. Perhaps it's time for residents of the 3rd district to learn from the instructive experience of Vulcan, West Virginia in the late 1980s. There's a crucial and delightful twist, seeing as the USSR and the GDR no longer exist.


It was my first Kentuckiana Pride Parade, but it won't be my last.


I've never participated in a Kentuckiana Pride Parade, so today was a first for me, and awesome to boot. Thanks to Centerstone of Kentucky, Diana's employer, for having me.


Many of you hadn't been born the last time these Schmitt Furniture windows were visible.


Much of Schmitt Furniture's block is being overhauled as I write, with projects underway on all four sides. There's much work yet to be done, but for today, to those engaged in this process: thanks and congrats.


2-for-1? Scott Blair describes a better way to save the Reisz building AND get a new city hall.


Blair's idea has one major flaw, because the work required to save Reisz and build city hall probably would not be finished before next year's elections, and completed bright shiny objects are essential to Gahan's flashcard campaign strategy.


Stop the Reisz Elephant: There'll be a public meeting on Wednesday, June 27, downstairs at the library, at 6:00 p.m. 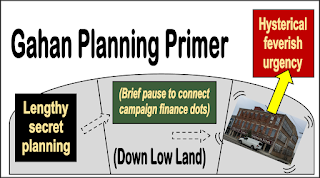 
The two most recent Manic Street Preachers albums, ending one era and beginning another.


A new Manic Street Preachers album has been released. It's called Resistance is Futile, and I love it. There'll be more to say about the album at another time; for the moment, here's a glorious song (above) and an excerpt from the review at NME:


Smoking gun? City Hall finally releases the "Reimbursement Agreement" with Denton Floyd. A "do over" for Reisz is possible, isn't it?


As such -- and I'm not a lawyer -- the agreement reads as though in the interim, Denton Floyd is to receive a sum of money to carry out certain tasks, and if council approval isn't forthcoming, ownership and improvements pass back to the city.

In short: contrary to corporate attorney Shane Gibson's assertions on the 21st, a Reisz Elephant do-over is still very much possible. Gibson said demolition would be the only alternative, but if council were to reject the backroom deal and the Reisz pass back to the city, it would still be possible for Scott Blair's market-oriented alternative suggestion to come to fruition.


Jeff "Look at Me" Gahan's aquatic cult of personality: He brings us health, all by himself. 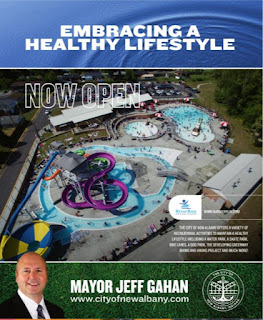 
Not to be outdone, Deaf Gahan plans a Pride Parade route for New Albany.


"Mike, this whole administration is just wonderful, and I'm just proud as punch about all this pride, but you didn't say if any trees will be removed for the parade. I can make that happen, you know. My peeps on the Tree Board know chainsaws. Take down those trees, and it makes it easier for people in their cars to see the buildings -- I mean, the parade banners."

"Unfortunately, no -- the whole parade route is inside a bar. It's not even historic."


Apartments above, vacant storefronts below. Why do commercial spaces in mixed use developments remain empty?


The reason these (often) mandated retail spaces remain empty is because they're priced too high and sized too large for indies; cookie cutter developers with little interest in the real world apart from grabbing municipal abatements and incentives don't bother very much to consider what might actually work in these commercial spaces, and they're willing to sit on emptiness rather than put in the effort to learn.


Truth is stranger than fact: Back in 2012, the Reisz building was to become a senior living complex. Bob Caesar kneecapped it -- and Deaf Gahan DISAGREED with Cee-Saw.


Welcome to Weird New Albany. Now that Summit Springs has been rendered into a partnership of sorts between its greed-headed developers and City Hall, and since it is being devoted to hotels and retail, not apartments, those bumps from 2012 are forgotten, and Caesar and Gahan can hold hands while praising the view from the Taco Bell by the strip mine. Moreover, having chased away Sterling, these two political lovebirds can bond over Reisz as a paean to luxury governance.


ON THE AVENUES: Histrionic preservation? $8.5 million to gift Jeff Gahan with a new city hall "want" is inexcusable and simply obscene in a time of societal need.


It's June, 2018, and peak Gahanism has arrived. The Leaden Anchor-Laden Emperor has decreed that housing conditions for his staff outweigh the needs of the many, and so it seems inevitable that the “dilapidated” and “neglected” Reisz Furniture building on Main Street not only will escape the tavern’s dismal fate, but is singularly worthy of conversion into a brilliant new showpiece City Hall, one destined to gather many gushing state and national preservation awards, and some sweet day, bear the mayor’s name in awestruck tribute.
Posted by The New Albanian at 7/03/2018 09:00:00 PM