The Gahan Maw, and other "institutional inbreeding" deformities. 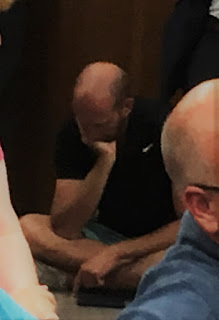 This notion of "academic inbreeding" makes me think about the current state of New Albany city governance.

Academic inbreeding is a socially charged phrase, with its etymological origins in the biological sciences. It may be argued that the naming of the phenomenon is unfortunate; nonetheless it is how this institutional practice is recognised around the globe, although in some places it is also known as institutional inbreeding. It is perceived as damaging to academia.

Yet its definition has been often misunderstood. Academic inbreeding can be seen as having narrower or broader definitions, but all are grounded in the principle of institutional immobility.


Seeing as there's nothing at all academic about Team Gahan, our ruling clique more aptly reflects a state of "institutional inbreeding."

Taking as an example the years-long struggle to revert our street grid, Jeff Speck was commissioned to do a study, little of which was grasped by the closed circle of Jeff Gahan's family members, groveling sycophants and Democratic Party advisers. The Speck Study was promptly neutralized via the business-as-usual sausage grinder, then presented to HWC Engineering, which held a mirror to the mess and rendered its own street grid plan in Wile E. Gahan's image.

If the same half-dozen self-interested bootlickers are the source of project input every single time, there simply cannot be fresh thinking or new ideas, only the same garish suburban outlet mall tripe.

There CAN be money, and plenty of it; obviously, cash is the pro forma of the quid pro quo, but there's nothing creative about that, is there?

The Habsburg Jaw and Other Royal Inbreeding Deformities, by G.H. Price (Owlcation)

The Longterm Effects of Incest and Inbreeding

In some places in the United States, folks make jokes about inbreeding. My own mother was from West Virginia, and some of her friends would often make “pumpkin head” jokes about the inbred folks where she came from. (It is true that her parents, my grandparents, were second cousins; however, both my mother and her brother were adopted.)

For a long time, the dangers of inbreeding or having children with a close relative weren't completely understood. The biggest problem with inbreeding is that when close relatives choose to mate, it results in homozygosity, which can increase their offspring's chances of being affected by deleterious recessive traits for all kinds of physical and cognitive disabilities, including ailments like hemophilia and cystic fibrosis as well as deformities like the Habsburg jaw. These incestual pairings also run a greater risk of...

Reduced fertility (both for the related parents and in their offspring)
Lower birth rate and higher infant mortality
Congenital birth defects (including facial asymmetry)
Certain kinds of cancer
Suppressed immune systems
Smaller adult size (pedigree collapse)
These days, we have genetic testing and other valuable research tools to help us determine what may happen if we have kids with someone who is biologically related to us. But up until just a few centuries ago, it was common practice for people to marry their cousins and even their brothers and sisters (and in many remote rural regions, the practice continues today).

Historically, family line relations were often formed in royal houses to secure political alliances, strengthen the lines of succession, and ensure the noble purity of the bloodline. This practice caused a host of ailments and deformities that can still plague descendants of these royal houses to this day ...