It's about the evictions, Jeffrey: “It’s an affordable housing issue. Incomes just are not keeping up with rent prices.” 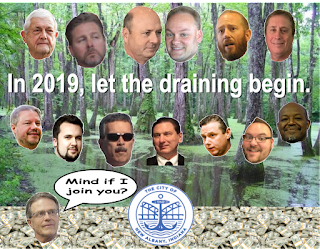 Last week, New Albany's mayor emerged from the bunker and sniffed the air.

He had five council votes in the bag, and in the absence of something approximating integrity suddenly infusing one of these captive sycophants, his greatest passion would be fulfilled.

Jeff Gahan would stick it to his county government enemies, all the while pretending his power play had something remotely to do with historic preservation -- the sort of ruse sure to attract "useful idiots" (Uncle Joe Stalin's words, not mine) to the lickspittling deception at hand.

Reassured, Gahan committed an act of perverse rarity: he deigned to appear at a council meeting so that the Reisz Five could kiss his ring in full public view.

Of course, Gahan got his plush self-referential palace of government at a cost of only $10 million (so far), increasing the space of city employees in terms of elbow room, and blessedly relieving the purely nauseating concerns of David Barksdale, who openly referred to "inhumane" working conditions in functional and air-conditioned offices, where operatives like Mike Hall -- publicly referred to as Director of City Operations, but officially paid $48,382 and 40 cents per year as "aide" for the Board of Works -- don't seem to be languishing in cages of the sort used to house children on the Mexican border.

Meanwhile, there is no recorded instance of Gahan, Hall or star frat boy poseur David Duggins publicly discussing the issues raised in this piece from WFPL.

That's $10,000,000 for government, and an unprecedented public appearance at a pre-rigged meeting, but neither the political capital or actual money expended to tackle social issues that affect ordinary people.

Gahan and the Reisz Five: Buildings, not humans. Luxury, not affordable housing. Working conditions for clerks, not help for actual workers unable to find a place to live.

It's sickening, and it never changes.

If anything, the disconnect gets ever wider, as elected officials like Barksdale micro-manage IKEA furniture placements on downtown street corners, but when asked to state a viewpoint aloud about Gahan's public housing demolitions, abruptly find their get up and gab done got up and went.

Imagine any of them debating this topic in a genuine open public forum -- but silly me. It's only 2018, and they needn't begin conniving to duck face-to-face meetings with their critics until February or March, 2019, at the very earliest.

The Reisz Five has unwittingly offered us a watershed moment. The stench of corruption is to thick to ignore. In the unlikely event that Denton Floyd actually completes Gahan's bright, shiny showcase campaign object in time for it to be used as a stump speech prop, we should have the counter-demonstration ready and waiting.

Because in New Albany, we have our own resistance to consider. Let's work together to topple the tinhorn.

“It’s an affordable housing issue,” he said. “Incomes just are not keeping up with rent prices.”

Families that spend more than 30 percent of their income on housing are considered by the U.S. Department of Housing and Urban Development to be rent burdened.

“There is a voided cost in preventing an eviction,” Hinko said. “Keeping people in place, in a decent place that they can afford with the wages they make, really has to be a number one priority.”