They're in it for the money: Team Gahan and its Plan Commission's cowardly and abject capitulation to the Kelleys and their Summit Springs development atrocity continues tonight. 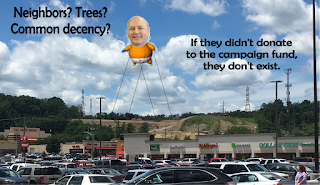 As we've noted previously, Summit Springs would not be possible without taxpayer subsidies for its infrastructure.


That's because it is a development that shouldn't happen in the first place.

The city opposed Summit Springs until Dear Leader reasoned that kickbacks from those entities benefiting from the development's approval far outweighs assurances given to neighbors or environmental consequences.

Consequently, the greed-driven monetization of Summit Springs proceeds apace, and the spoils stand to be divvied like they always are, because at present, in Year Seven of Bubonic Gahanism, there's little justice on tap in New Albany.

But there's lots and lots of money.

In future years, Summit Springs will become symbol of greed and corruption, forever inseparable from Jeff Gahan and those sycophantic fat cats, vendors and contractors feeding him scented grapes while stuffing their pockets as the mayor is fanned with palm fronds, lounging on the royal chaise lounge.

Too bad about Scott Wood. Then again, in a former age when integrity still mattered, he'd have resigned in principle long ago over Gahan's Summit cash flip. Integrity, trees, ethics -- in Clear Cut City, they all form perfect, orderly queues to await the chainsaw's ritualistic hum.


The fix appears to be cemented tightly into place.

A New Albany planning and zoning staff report gives the plan commission assurance that they can favorably recommend the PUDD to the New Albany City Council, which will also be voting on the rezoning.


Of course, the Kelleys -- a local synonym for avarice -- have already helpfully started the necessary process of deforestation. Money can't grow on trees, you know.

The plan commission meeting will take place at 7 p.m. in the Assembly Room (Room 331) of the City-County Building at 311 Hauss Square.

Documents show that the Kelleys were sent a cease-and-desist letter in April from the city telling them to stop cutting down trees in the Summit Springs phase two area. In 2016, the city faced the wrath of neighbors when they cut trees from the hills before phase one of the PUDD was approved.