62,572 annual reasons (and 26 cents) why "a great experience is priceless" is the worst answer for any city employee to give.


Shades of "no cost is too great" to rehabilitate the Reisz building. At least David Barksdale's not a mayoral family member, though that's small consolation in terms of squandered opportunity cost.

In New Albany, nepotism is a family tradition.

The Bicentennial Park Summer Re-Elect Jeff Gahan Concert Series begins anew on Friday, August 3. It's the sixth season of these events, followed by a year of rotating "Live @ Five" shows. How much has all this cost the city?

August 3 is my birthday. let's hope I'm at Pints & Union.

Why "a great experience is priceless" is the worst answer for any city employee to give. 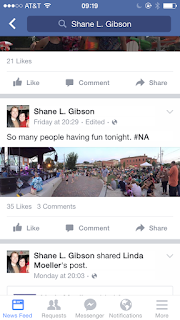 What does it cost the city to stage Friday evening concerts at a venue that wasn't built to host them?

Surely somewhere these raw numbers exist: Production Simple does the booking and staging, city workers block the street, prepare the grounds and clean up, police officers act as security, and of course, there are sponsorships, and these defray at least some of the costs, right?

Shouldn't this information be part of the public record? 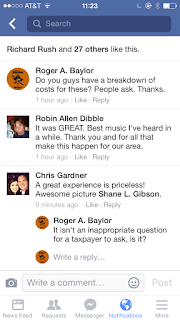 The quick response came not from Shane Gibson, but Chris Gardner: "A great experience is priceless."

Chris Gardner is the city of New Albany's director of flood control. He has a degree in business management (IU Southeast; 2010), used to work at a veneer plant, and is married to the mayor's daughter. These facts are matters of public record, and if subject to review by the most disinterested of space aliens armed with theories of impartiality and a recent dictionary, there'd almost inevitably arise at least some reference to the concept of nepotism.

Perhaps Jeff Gahan's exaggerated fluke of a vote total in 2011 blinded him to the implications of the word "nepotism", or maybe he didn't know what it meant in the first place. I doubt he cares, but even if the director of flood control weren't an otherwise unqualified son-in-law, and even if he were just another unqualified city political patronage employee, can this or any other mayor countenance a taxpayer inquiry being greeted with this?

"A great experience is priceless."


Perhaps Gardner's sequestration down by the river, where few people actually live, has caused Gardner to overlook the plain fact that lots of folks living hereabouts are not enjoying a great experience, because the reality of income inequality is that they cannot afford a frat boy's nonchalance, either in terms of attitude or disposable income.

What's more, not many of them are in a position to enjoy the bread, circuses and musical events being staged for their benefit. They're working multiple jobs, juggling parental duties and just scraping through. They're struggling with finding and keeping affordable housing. Whether we care to admit it or not, most of us are far closer to poverty than we'll ever be to the lofty ease of the 1%, and we'd be advised to remember how quickly any of us could fall through the patchwork safety net, which Republicans keep trying to dismantle.

Shouldn't Democrats be more concerned with maintaining a functional, level playing field than pretending to be Walt Disney?

Seriously, how many of us shrug and spend money without looking at the price?

Let's say I come home with a brand new car, run inside the house, get Diana and say, "Look at the nice shiny thing I bought for you."

Is anyone outside of the 1% NOT going to ask me how much it cost, to demand an explanation, to point out that we already owe far more than we make, and can we really afford it?

New Albanians should do the same. Experiences may indeed be priceless, but creditors are notoriously inconvenient when it comes to seeing the transaction in a different light. When Jeff Gahan's minions brag to you about their nice shiny objects, don't forget to ask them how much they cost ... and how do we pay for them ... and how many years will we be paying?

You'd ask these same questions when making your household purchases, wouldn't you?

Some day those objects won't be quite as shiny -- and your grandchildren will still be paying for them. That's neither great nor priceless, is it?
Posted by The New Albanian at 7/11/2018 03:48:00 PM