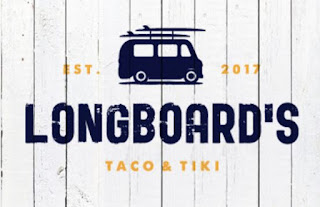 There may even be a third; more on that some other time.

At Longboard's, the Halls are cross-culturally adapting tiki to tacos, and throwing into the mix a Mexican-style lager beer brewed in Indianapolis -- and I like it. Such creative fusion makes perfect sense to me.

Tiki never was some sort of rigorous local tradition. It was a ingenious hybrid from the very start. Ironically, what's often forgotten is the founding connections between tiki and Chinese food, something that probably could have happened only in 1930s California during the pinnacle of Hollywood chic.

Tiki was, and still can be, so much more than kitsch. First, the food: a lot of Americans, certainly among the food nerd set, can now differentiate between Thai and Malaysian food, or Mandarin and Hunan dishes. But in the '30s, Don the Beachcomber was opening up a whole new culinary world when it served short ribs, pot stickers, and egg foo young to its guests. (Sunny) Sund had to import ingredients like oyster sauce directly from China, and she called her menu Cantonese, which, though we might scoff at the dishes now, was very sophisticated for the time.


The only reason I know any of this is the book I read last year in preparation to wrote about Chinese cuisine at Food & Dining Magazine: BOOK REVIEW: Chop Suey – or how Chinese food came to be taken for granted in America.

As a side note, the book's author Andrew Coe explains the interesting history of beggar's hash (chop suey) in this story at Food Republic. I'll resist drawing the obvious parallels between cultural fusion and a welcoming immigration policy. Take it away, Ms. Grady -- and best wishes to Ian and Nikki.

Owners of The Exchange do it again with Longboard's, by Danielle Grady (Tom May Country Diner)

NEW ALBANY — For the past 12 months, Ian and Nikki Hall have kept pretty quiet about their new restaurant — barely posting on social media. But behind the wooden doors of 302 Pearl St., they’ve been busy. Really busy.

The two restaurateurs, owners of The Exchange Pub + Kitchen and Brooklyn and the Butcher, have labored over every detail of Longboard’s Taco & Tiki, which opens to the public at 5 p.m. Friday.

Even when describing the restaurant’s concept, Ian Hall delves deep into the coastal origins of the Tiki bar — talking about its surprising start in California, not Polynesia, and describing the creator — an entrepreneurial New Orleans-native who drew inspiration from his trips to the South Pacific.

Take the level of research that Ian put into understanding the history of tiki and multiply it by a thousand to get Longboard’s food and drink menu ...