BEER WITH A SOCIALIST: Kalin Tavern, where a passport is required to cross the barroom.

Sitting on an international border can be bad for business.

Running a multi-national pub in the middle of nowhere can be tricky. Kalin pays taxes only in Slovenia, but has a separate phone number in each country. He doesn't get so many Croatian guests now that they have to show a passport just to get to his front door, so he only stocks Slovene beers. An old photo in the hallway shows Kalin's mom's dog in happier times, peeing on the border marker right outside the tavern door.


The Google street view above dates to 2013, affording a clean view of the Kalin Tavern on the left (note the awnings) and the border blockade running right across the street.

In Slovene, "gostilna" is an inn or pub. 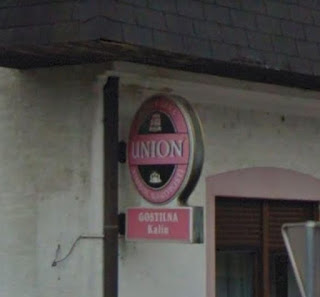 You might recall a digression from last year, in which I recounted my first and only visit to Ljubljana, Slovenia in 1987, when there was no wall across the road because all of it was part of the late Yugoslavia.

30 years ago today: (May) An introduction to Yugoslavia in Ljubljana, then Zagreb and the way to Sarajevo.

Union Pivo (beer) figured into that one, too. 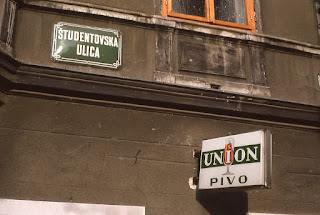