A 2016 reprise: "High atop Summit Springs with friends (and relatives) in low places." 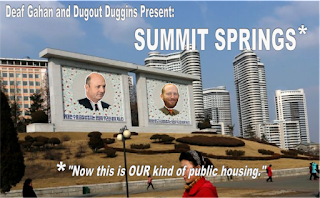 There's a bureaucratic fix scheduled for this evening. The action is necessary to keep the campaign finance spigot pouring gravy to those porcine troughs.

They're in it for the money: Team Gahan and its Plan Commission's cowardly and abject capitulation to the Kelleys and their Summit Springs development atrocity continues tonight.

ON THE AVENUES: High atop Summit Springs with friends (and relatives) in low places.

A STATEMENT FROM OUR MAYOR

Lately there has been controversy about a development project called Summit Springs – retail, offices, living space and a hotel. It’s an unusually complicated situation, but I believe this development will contribute to the improvement of the city, and so I’m going to explain it to you.

In zoning-speak, Summit Springs is a Planned Unit Development (PUDD). It originated many years ago and was approved, according to the planning and zoning rules in effect at the time.

Then there were delays, and in the city’s view, the property’s owners (the Kelleys) lost the plot. The city felt they needed to seek approval a second time, owing to changed circumstances. They disagreed. This led to them filing a lawsuit against the city, and eventually, the judge ruled against us, making their development inevitable.

Precisely because there are valid concerns about the hilltop site for the second phase of Summit Springs, I decided as mayor that the city would be better off actively participating in the refashioned development project, rather than standing aside and doing nothing.

In my view, by virtue of partnering with the property owners and their development company, the city could more effectively enforce the terms stipulated by the PUDD. Moreover, with the city constructing the necessary access road, we could tie Summit Springs to State Street’s existing grid in a comprehensive way, ensuring traffic would be better controlled on this already busy thoroughfare.

This decision to create a “public-private partnership” was mine, and mine alone. Whether you agree or disagree, know that the buck stops with me. I possess the ultimate authority, and my department heads follow a script that I write.

Having said this, I also take full responsibility for a few missteps along the way.

Had the city won the lawsuit, the ultimate development plan may have turned out differently, but in case we lost, we needed to have a contingency plan of our own.

This is why it appears to some of you that we were spending money to fight the developer even as we were preparing for the possibility of joining the development. Actually, what we were doing was being prepared.

It was a mistake for me to ignore the conceivable conflicts of interest in this situation, and while I honestly believe there was no impropriety, it’s certainly true that appearances matter.

Furthermore, I’ve come to see that nepotism is a potentially serious matter, and as such, I’ll be appointing an independent board of review to examine all such cases in my administration, regardless of where this body’s investigation leads. The run-up Summit Springs will be included in this process.

Now, back to Summit Springs. The bottom line is that while our city council is justified in revisiting its planning and zooming ordinances so as to account for future developments, and should do so expeditiously, it cannot retroactively change the rules for Summit Springs.

I’ve met with the families on Fawcett Hill Road, and their two major requests – to keep their road from becoming a through-way, and to increase the depth of the green buffer between their homes and the Summit Springs development – are both reasonable and do-able.

Because the city is partnering with the Kelleys on Summit Springs, I like my chances of ensuring these requests are honored. I’ll see to it that they are, and that’s a promise. We’ll get it right.

Finally, not only are we obligated to follow the law with regard to the Summit Springs PUDD, and to safeguard those nearby residents of Fawcett Hill, but we must be mindful of our ongoing, city-wide difficulties with stormwater runoff. We’ve been doing our best, but we simply must do better.

It’s past time for a comprehensive, updated storm water master plan, and it will begin at Summit Springs. Ultimately, this revised master plan will include the usual proven engineering solutions as well as innovative “green” incentives for homeowners and businesses to do their little bit in restoring hydrological equilibrium to the city of New Albany.

Thanks for your time. I’m confident that the key to future success with projects like Summit Springs is a fundamental enhancement of communications with the public, because after all, your tax dollars are at stake. Call or e-mail me any time.

“Yet again, you’ve been reading the words Mayor Jeff Gahan has not said, and will not say. These words are unlikely to be uttered, ever. Try to forget them. If you can’t forget, drink harder.”

Some residents were disappointed to learn Monday night that the New Albany City Council probably won't take action against a disputed development project, despite acknowledging that city officials and the developer potentially violated a 2008 city ordinance in the process.

"It’s so clear this is not proper procedure," said resident Aaron Hellems, who has continuously fought the so-called Summit Springs project. "It’s so clear that no one really wants to step up to the plate and do anything about it. They feel empathy and understand we’re in a difficult position, but when it comes to saying this is wrong and needs to be corrected, no one is willing to take it up."

The development in question -- located off State Street in New Albany -- was last approved by the city's plan commission and council eight years ago. The planned unit development district, or the PUDD, was delayed because of economic conditions at the time, according to the city's counsel, Shane Gibson.

At some point early on, the city agreed it would pay for an extension of Daisy Lane, forming a public-private partnership with the developer ...


It was left to Dan Coffey to astutely quiz the 800-lb gorilla.

"When did we go from being in a lawsuit against (the Kelleys) to being a partner with them?" Coffey asked Gibson Monday.

Gibson, who as corporate counsel for the city has been privy to the location of so many dead bodies that he probably knows the mayor’s gym locker combination, simply ignored Coffey’s query.

Scott Blair noticed, and promptly followed up, asking Gibson this question a second time, and the attorney quickly copped a plea.

He said he didn’t know.

Well, of course he didn’t. No one in the city knew, either.

In March, no one knew that Summit Springs was about to rise from the dead. No one knew that when it did, the city already had executed a deft 180-degree turn, ditched a three-year lawsuit faster than a used condom, and claimed a piece of the action, boastfully deploying that most exhausted of bromides, “public-private partnership,” to explain the turnabout.

In a city where 25% of the inhabitants live beneath the poverty line, no one knew how important is was for us to have a high-end hotel property clinging to the side of a geological questionable hillside, with an exhilarating view of Louisville for those well-appointed visitors in town to see friends who’ve taken up residence at the “luxury” balsa bocce hutches known as Break Wind Lofts at Duggins Flats.

But everyone knew, at least once the clearcutting began on the hillside, owing to statutory pre-emptive bat breeding regulations understood by so few public officials that John Rosenbarger came close to unceremoniously botching them within the confines of his Ohio River Greenway fiefdom, before rushing chainsaws at the last possible moment to further denude a constantly eroding riverbank.

By then, the full frontal Summit Springs slope already had been timbered, and when the inevitable questions started being asked, Scott Wood stepped forward to take responsibility. On Monday, Gibson again stated that Wood acted alone, entirely removed from City Hall’s oversight.

It’s a surprise that Wood wasn’t fired –not because he approved a clear-cut explicitly prohibited by the PUDD in question, but because by doing so, his boss’s public-private cat was loosened from its restraining bag, and the city was forced to come forward with its hackneyed “another heroic Gahan victory for God and country” press release before the errors in spelling and syntax had been corrected by the third floor’s cleaning lady.

Coffey’s question again: "When did we go from being in a lawsuit against (the Kelleys) to being a partner with them?"

Until we know the answer, there is an ongoing and perfectly legitimate question about conflicts of interest, even if wasn’t obvious at first.

The city’s economic development director is David Duggins. His sister is married to Paul Wheatley, chosen by the Kelleys to develop their land. Duggins’ preferred model of old school, back slapping, golf course visiting, strip club patronizing, hundred dollar handshake “economic development” (with taxpayer expense account) is tailor-made for just this sort of abuse – as is Gahan’s refusal to learn the meaning of the word “nepotism.”

However, one thing is clear. A City Hall constantly prattling about its prowess in public-private partnerships should be able to guarantee implementation of the Fawcett Hill Accords.

By doing so, Jeff Gahan would at least spare these ignored residents the financial burden of engaging attorneys and waging a war of legal attrition, which is their only choice at present.

When I told this story to a local political old-timer and asked for his reaction, here is what he said.

I’d like a double for two nights at the Vindictive Suites by B. J. Sheraton, please. Check in is at 4? That’s perfect. I have bocce at 6, followed by mocktails on the River Run mezzanine.

Can you call me a cab?