Jumping the loan shark: "A way of monetizing poor people." 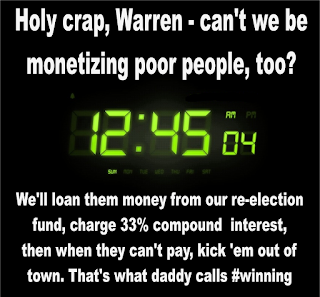 After all, cash-stuffed envelopes can take many forms.

The check arrived out of the blue, issued in his name for $1,200, a mailing from a consumer finance company. Stephen Huggins eyed it carefully.

A loan, it said. Smaller type said the interest rate would be 33 percent.

Way too high, Huggins thought. He put it aside.

A week later, though, his 2005 Chevy pickup was in the shop, and he didn’t have enough to pay for the repairs. He needed the truck to get to work, to get the kids to school. So Huggins, a 56-year-old heavy equipment operator in Nashville, fished the check out that day in April 2017 and cashed it.

Within a year, the company, Mariner Finance, sued Huggins for $3,221.27. That included the original $1,200, plus an additional $800 a company representative later persuaded him to take, plus hundreds of dollars in processing fees, insurance and other items, plus interest. It didn’t matter that he’d made a few payments already.

“It would have been cheaper for me to go out and borrow money from the mob,” Huggins said before his first court hearing in April ...