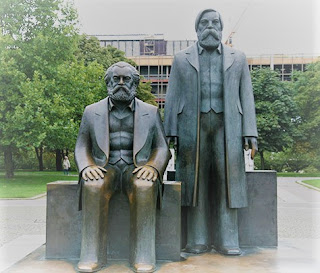 David Harvey's answers at Jacobin are clear and concise. Readers are urged to read the entire interview. It's very rewarding.

David Harvey on why Karl Marx's Capital is still the defining guide to understanding — and overcoming — the horrors of capitalism.

It’s been more than a century and a half since Karl Marx published the first volume of Capital. It’s a massive, intimidating tome — one that many readers might be tempted to skip. Radical scholar David Harvey doesn’t think you should.

Harvey has taught Capital for decades. His popular courses on the book’s three volumes are available for free online and have been watched by millions around the world; they were the basis for his companion books to volumes one and two. Harvey’s latest book, Marx, Capital, and the Madness of Economic Reason is a shorter companion to all three volumes. In it, he deals with the fundamental irrationality of a capitalist system whose functioning is supposed to be anything but.

Harvey spoke with Daniel Denvir for Jacobin Radio’s podcast The Dig, about the book, capital’s simultaneous creative and destructive forces, climate change, and why Capital is still worth wrestling with.

DD
One reason that it’s important is that we need it to understand this dynamic of constant expansion that drives capitalism — what you call a “bad infinity,” citing Hegel. Explain what this “bad infinity” is.

DH
You get this idea of a “bad infinity” in volume one. The system has to expand because it’s always about profit, about creating what Marx called a “surplus value,” and the surplus value then gets reinvested in the creation of more surplus value. So capital is about constant expansion.

And what that does is this: if you grow at 3 percent a year, forever, then you get to the point where the amount of expansion required is absolutely huge. In Marx’s time, there’s plenty of space in the world to expand into, whereas right now we’re talking about 3 percent compounding rate of growth on everything that’s happening in China and South Asia and Latin America. The problem arises: where are you going to expand into? That’s the bad infinity coming into being.

In volume three, Marx says maybe the only way it can expand is by monetary expansion. Because with money there’s no limit. If we’re talking about using cement or something like that, there’s a physical limit to how much you can produce. But with money, you can just add zeroes to the global money supply.

If you look at what we did after the 2008 crisis, we added zeroes to the money supply by something called “quantitative easing.” That money then flowed back into stock markets, and then asset bubbles, especially in property markets. We’ve now got a strange situation where, in every metropolitan area of the world that I’ve visited, there’s a huge boom in construction and in property asset prices — all of which is being fueled by the fact that money is being created and it doesn’t know where to go, except into speculation and asset values.


Then, the "madness of economic reason."

DD
It’s precisely that issue of credit that led you to borrow a phrase from Jacques Derrida, “the madness of economic reason.” Colloquially, madness and insanity are invoked to stigmatize or pathologize individuals with mental illness. But what Marx shows us, and what your book shows us, is that the system is actually insane.

DH
The best measure of that is to look at what happens in a crisis. Capital produces crises periodically. One of the characteristics of a crisis is that you have surpluses of labor — people unemployed, not knowing how to make a living — at the same time you have surpluses of capital that don’t seem to be able to find a place to go to get an adequate rate of return. You have these two surpluses sitting side by side, in a situation where social need is chronic.

We need to put capital and labor together to actually create things. But you can’t do that, because what you want to create is not profitable, and if it’s not profitable then capital doesn’t do it. It goes on strike. So we end up with surplus capital and surplus labor, side by side. That is the height of irrationality.

We’re taught that the capitalist economic system is highly rational. But it’s not. It actually produces incredible irrationalities.


Finally, the amorality of capital.

DD
You wrote in Jacobin recently that Marx broke with moralist socialists like Proudhon, Fourier, Saint-Simon, and Robert Owen. Who were these socialists, and why and how did Marx part from them?

DH
In the early stages of capitalist development, there were obvious problems of conditions of labor. Reasonable people, including professionals and the bourgeoisie, started to look at this with horror. A sort of moral repugnance against industrialism developed. Many of the early socialists were moralists, in the good sense of that term, and expressed their outrage by saying, we can construct an alternative society, one based on communal wellbeing and social solidarities, and issues of that kind.

Marx took a much more scientific view of capital and said, now we actually need to replace the whole system. It’s not just a matter of cleaning up the factories — we’ve got to deal with capital.