GUEST COLUMN: Councilmen on Reisz: "You have a duty to treat public money as the public’s money. You can’t just spend it on what you WANT." 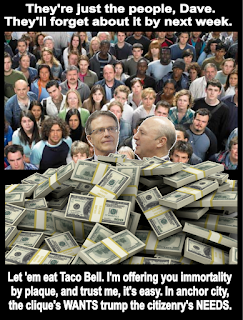 This commentary is contributed by Randy Smith, owner of Destinations Booksellers.

A fictional council member of a Second Class City in Indiana:

· I WANT to give taxpayer money to a church. Sorry, it’s not allowed under the constitutions of the United States and of Indiana.

· I WANT to give taxpayer money to a charity. Sorry. Indiana has given the trustee the ability to levy taxes for such purposes. They have not given it to you. Go talk to the trustee.

· I WANT to give taxpayer money to the schools. Sorry. If you hadn’t given up the authority to levy taxes for schools years ago, it could be done. But you did and you can’t.

· I WANT to create a public transit system with public money. Sorry, you gave that authority and all available revenues to TARC.

I WANT a new city hall. Hmmm. Do you have a need for new space? Is the space you have too small or is it unusable? Do you have financial obligations that make that too expensive? Do you have a fiduciary responsibility to the taxpayers that overrides what you WANT?

Guess what? If you want a new city hall, it’s not illegal. In the current circumstances, it’s evil, but it’s not illegal. Considering the vastly inflated costs, there are almost certainly individuals who can be indicted, and even if I’m wrong, it stinks to high heaven.

You have a duty to treat public money as the public’s money. You can’t just spend it on what you WANT.

Now, if you want to raise your personal pay packets, I might just come down and speak in favor of it. It certainly would improve the talent pool at election time. Then, if you WANT something, you can spend YOUR money on it. If you want to preserve old buildings, you can invest YOUR money. If you have a pet charity that involves, oh, let’s say backpacks, you’ll have extra money you can donate. Gosh, I guess if you want to give money to a church or a school, you’ll be able to.

But keep your hands off my money.

No Democrat, no Republican, no independent is looking at next year’s municipal election and saying, “You know, if those Democrats would just demolish half of all public housing, I’ll vote for them.”

No Democrat, no Republican, no independent is looking at next year’s municipal election and saying, “You know, if those Democrats would just build a new city hall, I’ll vote for them.”

Votes matter. Machines don’t. You may think you’re invulnerable from defeat. You are not. Ask the people you replaced if they thought they were popular, if they were sure they would win reelection. You may say, well, I’m a Democrat in a Democratic district. So long as I play along with the machine, I’ll be safe.”

You may be saying to yourself, “This is New Albany. This is Indiana. There won’t be any newly energized voters looking to lop off the heads of incumbents.”

You may be saying to yourself, “I’m giving up my seat after next year, but at least my name will be on the plaque for a city hall that should last a while. This ‘yes’ vote will be my legacy.”

It’ll be your legacy, alright. It will haunt you. It will diminish your reputations. This is but another in a long line of decisions made in the shadows – most of it was even kept from this body, although I can’t speak to how many private conversations with particular councilmen led to this vote.

Why do we need new space for city hall? Because Jeffersonville and Clarksville got new ones? Why are we renting such an enormous amount of space? Because the city civilian staff has tripled? Why are we choosing the Reisz warehouse? Because the developer took decision-makers on a junket to Keeneland with paid escorts? Why are we paying such an exorbitant rent when we don’t have to?

How much more are we going to pay in utilities? Who is going to perform and pay for the maintenance of this ancient building? How is security going to be handled? Are we going to replicate the guarded entrance and metal detectors at the current site? New furniture is a given, but how much MORE furniture will be needed for triple the space? Will there be a vast public hall available for public meetings, government or community? Will that public hall be designed for the broadcasting of official meetings and with a sound system that allows all in the hall to hear? Will the building have public wi-fi and will it be strong enough to accommodate hundreds?

The building exists. It is old. But in the words of Councilman Barksdale, does it even meet the criterion of “contributing?” Why have we not had a vigorous discussion of this warehouse’s historical significance? There are many buildings that have been torn down, much to the regret of historic preservationists LIKE ME. Most were torn down because the city wanted them gone, or at least, were willing to let them be. Who says this building is about to be torn down? Jeff Gahan? What the hell does Jeff Gahan know about historic preservation? Does he even give a fig?

I don’t think even one councilman is urging this building be torn down. In fact, I believe every member is in favor of the building being put to an adaptive reuse. The city can prevent demolition and if they won’t, the council can defund the administration until they comply with the council’s wishes. They can make the position of mayor an unpaid position. They can impose new restrictions on the RDA and RDC until they comply with the council’s wishes.

If every single member were in favor of this expensive relocation, would the Reisz building be the place to move?

Mr. Barksdale is so clearly compromised in this matter that he must abstain from voting, particularly if he stands ready to provide the fifth “yea” in a 5-4 vote. David, have you come to some sort of accommodation with Mr. Coffey whereby he can provide the fifth vote? How about with David Aebersold? Councilman Blair? President Knable? And if there are not even 4 “yes” votes without you, don’t tarnish your integrity. Tonight, I don’t ask you, David, to vote against this boondoggle. I insist, however, that you have such obvious conflicts of interest that you must abstain. Give up your seat temporarily and march to the podium as a citizen with a special interest and make your best advocacy case. But don’t pretend you are objective.

A 4-4 vote will set the stage for a reasonable exploration of ways to reclaim the Reisz building and to determine if a relocation of city administrative offices is wise.
Posted by The New Albanian at 7/02/2018 12:07:00 PM