30 years ago today: (May) An introduction to Yugoslavia in Ljubljana, then Zagreb and the way to Sarajevo. 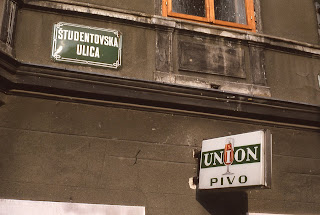 ON THE AVENUES: Welcome to wherever you are, and come to think of it, Ljubljana will do nicely.

A disorienting transition from capitalism to socialism went like this.

Remind me to never again arrive in a strange city at 10:30 in the evening on a Friday, especially when the conscripts have gathered for their final night on the town, and all the suggested hostels are padlocked.

Early on a Saturday morning in Ljubljana -- now the capital of independent Slovenia, then a major regional city in Yugoslavia -- things began settling down within range of sensible.

The youth travel office directed me to Dom Tabor, a hostel somewhere in the center of Ljubljana that evidently remains in operation three decades later. Today's Google street view of Dom Tabor conjures no memories, but in 1987 it had available space for a Saturday night, albeit not in the cheaper dorm rooms of my preference.

Instead, I was billeted in a single room. For my second night in Yugoslavia, I'd be paying only double my daily budget for a bed, not triple like the disastrous night before. This was progress, I suppose; still, my scant notes indicate annoyance at the relatively high prices of Slovenia. 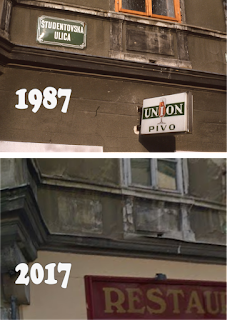 Insofar as my brief travel experiences informed me, Slovenia seemed out of place, tied to Yugoslavia and at the same time feeling far more Central European than Balkan. The hilly setting in Ljubljana reminded me of Salzburg, in Austria, and the red tiled roofs were a Mediterranean flourish resting atop imperial-era Habsburg buildings.

In fact, without belaboring the point, the Slovenes were under the dominion of the Holy Roman Empire for a millennium, then the Austrian for another 400 years. Only in 1918 did the European powers-that-be assign them to the newly created Yugoslavia. It was an uneasy marriage, and Slovenia artfully slipped away from Yugoslavia in 1991, with little blood shed.

The violence came later, to the south.

In Ljubljana in 1987, there were snarling dragons guarding the old downtown bridge and a teeming Saturday morning market in the square; tarnished copper stains on buildings with chipped columns; the widespread occurrence of chain smoking and public spitting; and a curious aroma in the air that eventually registered as coal smoke, which I hadn't experienced in metro Louisville since childhood. 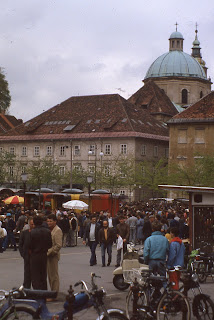 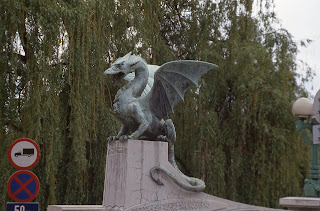 In the old town, there was a little pizzeria by the river, and I splurged on a small pie accompanied by draft Union Pivo, tasty lager from the hometown brewery, which I managed to locate later while walking after the sun finally came out. 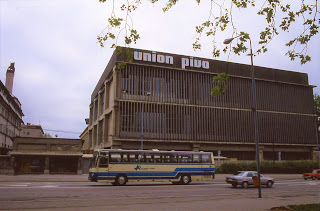 However, I'd already learned it was more cost effective to drink from the bottle -- and by my reckoning, I needed more than one beer.

On Saturday afternoon, fearing none of the stores would be open, I abruptly strolled past a line of people waiting to enter one, which was doing business with the door propped open. Emerging with three half-liter bottles of Union, it was time to sit on a park bench and gaze at the hilltop castle.

Where the suburbs began, so did the unpainted gray housing blocks, which were Yugoslavia's (and the East Bloc's) solution to warehousing its postwar population. In these neighborhoods there proved to be more examples of commerce than I'd imagined, mostly products being vended from wooden kiosks: cosmetics, street food, flowers and newspapers.

At last mildly buzzed and relaxed, it was time to reflect. Determined to meet my lodging budget, I determined to keep moving, returning to the formerly chaotic train station on Sunday afternoon to find it placid and normal, the employees no longer overwhelmed by drunkards. In retrospect, I might have chosen a smaller Slovenian city than Ljubljana and regrouped, but it was a short hop of three or so hours to Zagreb … and a fateful meeting.

In January, 2008, it finally occurred to me to search the Internet for some of the names I'd recalled from my travels decades earlier.

One of them was Radojko Petkovski, whose name promptly surfaced in a handful of listings, each attesting to his collaboration on fairly recent seismology studies, fully befitting an apparent post-Communist career advancement for a man whose 1987 business card identified him as an earthquake engineer working for an institute of earthquake studies in Skopje, Macedonia (Yugoslavia).

The second class cars on the Yugoslav "express" train from Ljubljana to Zagreb weren't terribly crowded. Seated opposite me was a conservatively dressed, well-groomed man probably in his late 30s, quietly reading a newspaper. When the conductor came past to check tickets, there was momentary linguistic confusion.

The man smiled, spoke to me in accented English, and answered the conductor. As the door shut, enclosing the claustrophobic old-fashioned compartment, I was handed a business card and an elemental conversation ensued.

He asked me to call him Rady. He spoke a bit of English, and naturally I spoke none of the Yugoslav languages. There were to be future implications to the fractured dialogue, but for the moment, it was quite pleasant to engage with a local.

Soon we pulled into one of the intermediate stations, and resting on a siding adjacent to us was a train filled with dazed young soldiers looking out their windows.

I'd been trying to explain the scene at the station in Ljubljana, and Rady nodded; he'd seen it, too, and proceeded to explain what I'd witnessed, noting that the rowdy specimens I experienced were draftees being shipped out for basic training, as were the meek (hungover?) soldiers glimpsed outside our window. They may have been one and the same.

Soon we had arrived in Zagreb, and Rady made it a point to invite me to Skopje for a visit. I told him it might not be for a couple of weeks. His card was filed in my pouch, and we said goodbye.

As it turned out, the youth hostel in Zagreb had a suitably priced bunk bed for one night only, after which a school group was coming on Monday to fill all the spaces.

I recall having a few mugs of cheap lager beer on a patio outside the train station, with time for a walkabout. Interestingly, the only observation I saw fit to record was "construction work on Trg Republike," this being the central square in Zagreb. When Croatia became independent, the name was changed to Ban Jelačić Square.

What was the construction about? Here's the answer, courtesy of the Yugoslavia Virtual Museum.

The city of Zagreb used the event to renovate and revitalize the city. The city's main square (Republic Square) was repaved with stone blocks and made part of the downtown pedestrian zone. A part of the Medveščak stream, which had been running under the sewers since 1898, was uncovered by workers. This part formed the Manduševac fountain that was also covered in 1898.


This was the work I saw occurring, two months prior to the main event,

On Monday morning, I hopped aboard a train into the interior, eventually passing out of Croatia and into the rugged mountains of Bosnia-Herzegovina. My destination was Sarajevo, and a date with Archduke Franz Ferdinand.