The politics of diversion: "Chief Bailey is playing a losing hand, but then, they're not really his cards." 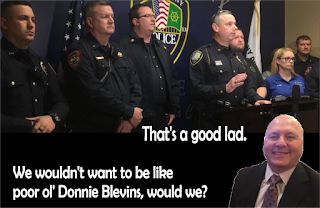 Much ado about nothing, Jeffrey. Zilch, nada ... ничего.

NEW ALBANY — The need for a joint city-county dispatch center in New Albany is disputed by the city's police chief.

Chief Todd Bailey called a news conference Friday, when he accused City Council President Al Knable of telling a falsehood to show a need for a unified dispatch. Bailey also said the push for joint dispatch is political.


In short, another round of made-for-somnolent-media bile and spittle.

In an interview following the news conference, Knable maintained there was a call made, but said he believed the error was on his end, not a result of the two dispatch centers. Knable said he did make a call, and turned over his phone records to the chief of police to prove it, but he used Siri to do so. As Knable explains it, he has the New Albany Police Department’s tip line saved in his phone under “911/NAPD,” so when he instructed Siri to call 911, the virtual phone assistant called the wrong line.

By the time he hung up from the tip line, he had assessed the situation and helped the young child, who had been scared and screaming “fire” and "help,” said Knable, adding at that point he realized it wasn’t an emergency. He said he did not make claims of an alarm sounding.

Knable contends Bailey's focus on the anecdote is a distraction from the bigger conversation, merging the two centers and “making sure the taxpayers have the safest, most-efficient system out there.”

“I’m looking to get the chief of police, sheriff, mayor and commissioners to the table,” Knable said.


The fact is that throughout this entire 9-1-1 call center non-discussion, Bailey's professional integrity hasn't ever been questioned, not even once.

Rather, certain Republicans, joined by some like-minded independents and even a Democrat or two, are petitioning for a discussion of costs and potential savings.

Is this also a political position? Yes, just as much as Gahan's benumbed, rote insistence that past county government fiscal turpitude -- a habit of suicide by starvation pioneered not by the GOP but by old-school Strom Thurmondesque pretend Democrats like Ted Heavrin and Larry McAllister -- somehow forms an eternal excuse for the mayor to erect straw men and gather municipal power into a veneer salesman's idea of an unbearably vapid cult of personality.

Another day and another display of petty, time-wasting theatrics by Team Gahan's resident DemoDisneyDixiecrats.

Is this really the best that local government has to offer?

Previously: The devil's in the framing, and it's public safety versus cold hard cash in the discussion about merging city and county dispatch centers.
Posted by The New Albanian at 3/23/2018 09:47:00 PM

This is so wrong in so many ways.
First of all, I have been talking about combining the 911 centers before I was ever elected as County Commissioner.
Secondly I brought up this topic again during a Commissioner Meeting last month. It was in regards in how one way we could make schools safer by having all law enforcement on the same call system.
The paper decided to run a story and they interviewed a few local elected officials.
The Mayor was the only one who made this a political issue. He stated a proposed bill would change how 911 funds where distributed. The bill he spoke about was a bill that the House of Representatives wasn't even considering. It had zero chance of becoming law. So his argument we wanted to merge the 911 call centers based upon funding is totally wrong.
It's sad the Mayor is basing public safety upon politics and not what's right for the community at large. I just don't understand his motives.

The motive is self-preservation. The gradual erosion of power v.v. the Democratic Party has it approaching these next two election cycles in a position of extreme paranoia, because if the party loses power, "poof" go the perennial spoils. As for Gahan personally, his entire political career has been predicated on "good city Democrats" versus "bad county Republicans." It's pretty much all he has, and he's doubling down on it. I believe Todd Bailey's fine as police chief, but he has no choice except to splash around in the mud with his superior. It's demeaning to all, but there it is. Not a week goes by without someone telling me about the latest instance of Team Gahan threatening those city employees far down the pay-grade totem pole, demanding public displays of loyalty lest something unfortunate happens. It's mobster-style, and an expression of just how desperate the Democrats are starting to feel.

“I will not let those people(group of NA citizens)tell me what to do”. True quote said to me. If he can’t collect credit forget about it.

I supported Jeff Gahan in his first run for Mayor. In less than a year it was a decision that I deeply regretted. Hunkered down. Impossible to reach. Over 3 years passed of no publicly available email address. Ironically, right before his run for a second term, an email addresss appeared on the city’s website. Did he know that it was previously NOT publicly available. Yes. We ran into each other less than a year after taking office. He asked me if there was anything that he could do for me. “Yes. I’m so disappointed that you never come to city council meetings and you don’t even have an email address.” He replied, “Well I certainly get a lot of emails.” “That may be” was my reply, “but it is not publicly available.” He said that he would fix that. He did, SHORTLY BEFORE HIS 2nd run for Mayor, years later. Need I
mention that I constantly complained for the next 2 1/2 years about the lack of access?