THE BEER BEAT: Taco Steve back at BSB, and a year's hiatus for the Bloomington Craft Beer Festival. 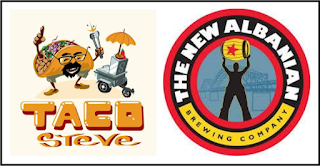 Since Tuesday morning, my visits back to the old NABC stomping grounds will forever more be in the guise of a civilian, or perhaps a journalist.

Maybe just as a beer drinker, the way this whole business started before it became ... well, a business.

It will be hard to completely separate almost 30 years of my adult life from habits developed over the preceding years, but it feels good to finally have complete closure, and we all move forward.

On Saturday, Taco Steve debuted at the freshly painted and recently redubbed Bank Street Brewhouse; the word "cafe" never really sounded right, did it? About a dozen customers were eating and drinking on site when I stopped by around 3:30 p.m. to chat with Heather Morris, who runs the front of the house.

According to Heather, the month of March is being dedicated to integrating Taco Steve and putting things back into place, and there'll probably be a grand opening celebration of sorts come April. Guest beers are going away, with the exception of cider and mead, and the focus will be on BSB as a brewery taproom.

For any independent business, the devil always resides in the details. That said, Taco Steve's arrival seems to have energized the crew, and this is pleasing. Several times during our talk, Heather mentioned the word "focus," in the sense of identifying core values, improving them, and making these basics the thrust of BSB's interface with the beer community.

(edit) March will be a time of evolution. Taco Steve has updated his hours of operation at BSB, and so to avoid confusion, I'll await an updating of the business hours for BSB. If there is any doubt, call ahead.

While we're on the topic of Indiana, this notice from the Brewers of Indiana Guild.

February 26, 2018 | Tristan Schmid, Posted in News | Be the first to comment.
As mentioned in our recent Winterfest wrap-up, Bloomington Craft Beer Festival is on hiatus for 2018 as the Woolery Mill is being developed and we look for suitable locations and opportunities in 2019.

Finally, don’t forget to mark your calendar for the 23rd Annual Indiana Microbrewers Festival on Saturday, July 28 at Historic Military Park in Indianapolis.


The Bloomington fest had a rough beginning, but over time it grew into a fine event. The location at Woolery Mill was a big part of the fest's identity, and so I wish all the best to my former colleagues on the guild's board as they plot the future site.
Posted by The New Albanian at 3/04/2018 11:04:00 AM