For those just tuning in for today's sad installment of Local DemoDisneyDixiecrats of the Formerly Black But Now Very Greenback Lagoon, two pivotal local election cycles are approaching, the soulless pretend-left political machine is on the ropes, and that bleakest of functionaries, Pat "How High, Sir?" McLaughlin has channeled his inner Adam Dickey into a resolution to censure city council colleague Al Knable for an entirely imagined offense -- or to be brutally frank, for performing the task of council president far better than Paddy Mac ever did.

These are the depraved depths to which Team Gahan has plunged, whether the News and Tribune's deficient management team can bring itself to admit the obvious, or not. 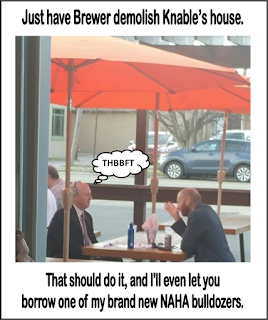 McLaughlin's resolution serves as convenient and compelling proof that our local Democrats have left the rails. The only viable alternative to more of the same is to vote against them at every opportunity.

But first, let's take a brief glance at some of the reactions to our coverage of the ongoing travesty.

Jeff Gillenwater (junior editor): "This (Democratic Party Fb post) is a lie to advance a political agenda. Members of both parties have been discussing the possibility of a call center merger for nearly a decade. Bailey and the rest of you affiliated with this ridiculous smear attempt ought to be ashamed but, as so many have learned and are learning the hard way, you all don’t really recognize shame amongst the cheap shots, half-truths, and innuendo. The number of people swearing off the local party and its candidates because of abominable behavior like this is growing. They do not see the party as a vehicle for progressive ideas and humanitarian concerns precisely because it’s not. Those still clinging to “local leadership” are likewise losing the respect of many. Keep it up.

D: "The conflicts we Democrats face at the national level require we take the high road at the local level. This (Democratic Party) article and what lies behind it do the opposite, and threaten everything the Dems should be standing for."

B: "Wow. That’s incredibly dishonest, even by local standards ... This has been thoroughly discredited in other threads and forums. The censure is complete partisan nonsense of the worst kind."

K: People know better than to believe that crap, don’t they? I believe Al at his word - a mistake ... This is going to backfire on them.

Billy Stewart (county commissioner): "We can have disagreements about policy and what we believe in how things should be but there is never a reason to try to destroy someone over partisan politics. I don't always agree with other elected officials but I respect their views. I'm truly saddened by the actions of a few City officials trying to smear the reputation of a good person. The only way we can change things is through the ballet box. Remember who did what and vote accordingly."

A: "So, does Pat's Resolution invite us all to write our own Resolutions? Whereas, we can encourage truthful dialogue from he, Jeffrey, and other city officials? That sounds like a fun game! Pat's Resolution could be used as the template and we just change the words and subject to expose real liars. It could be a competition. All participating have their first reading on Monday under Pat's agenda item, and all who participate win because standing up to bullies makes you a winner! ... I hope Pat doesn't become chicken at the last minute and pull his resolution from the agenda. That would spoil all the fun."

BC: If this is the best the Dems can do, then they are in major trouble in Floyd County. They are dying on the vine already and this is simply an extreme stretch to TRY to be noteworthy. Knowing Al as I do, he is an upstanding member of the community and is a straightforward guy who wants the best for New Albany.

R: "Mclaughlin is my council rep. I haven’t seen him in my neighborhood since Baron Hill was running for re-election more than a decade ago. I’m vacillating between whether anger or appalled embarrassment better describes my reaction to this idiocy. Al Knable may have some views with which I differ, but he’s not averse to listening and actually hearing what citizens say."

D: "What a waste of time and money... to attempt to discredit someone you are working with for the greater good of your city. It’s an embarrassment. I’m sorry Al Knable ... keep doing what you’re doing. Posing questions and getting the answers for your constituents. Representing their best interests with integrity. It’s in your job description. What I’m SURE is not there is when something you don’t like comes to light, you strike out at the credible people. Stay the course and do the right thing, always."

S: "Not sure what to make of this world when Dan Coffey is the voice of reason."

M: "Think I have figured it out. It’s just his way of announcing that the price will be high for him to flip. And he will, if the price is right. Have seen him make 180 turns before."

P: "I’ve known Al for around 40 years, both personally and professionally. I will continue to trust and support him. This is what happens when a good person tries to get into to politics to make a difference, and it greatly saddens me."

Reverend Mike Becht: "I am certain that if Mr. Baylor and I sat down to discuss issues and politics, we would find ourselves holding opposite points of view on many areas of public concern. However, it is telling that we appear to be 100% in sync with respect to one pressing matter - the current tempest enveloping Dr. Al Knable.

Having known Al for more than 35 years, I can personally vouch for his honesty and integrity. That is not to say we always agree on every topic. I'm sure we do not; but I have NEVER once found him to be less than candid, respectful and fair, even when we find ourselves landing at opposite positions on a matter. To suggest that he would lie for political gain is patently absurd, and reveals more about the character of the ones who are making that claim than about the good doctor, himself.

"I am never surprised by the ugliness and mudslinging that goes on in politics. But I am surprised that some in power have calculated that their best course of action is to engineer a public attempt at character assassination.

"Some question the provenance of the quote attributed to Edmund Burke, "The only thing necessary for the triumph of evil is for good men to do nothing." Regardless of who originated the thought, there is no escaping the truism it propounds. I, for one, am not willing to stand by and watch a good man pilloried. And if you have any sense of decency, neither should you."

Following are comments posted here and there in support of the censure resolution.