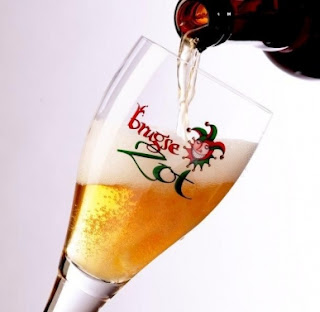 Indeed, one of the central glories of Belgian cafe culture is the presence of appropriate glassware in just about any drinking establishment, from dive to grandiose, shaped and sized, with logos. To experience this phenomenon is to understand the notion of integrity in a drinking culture.

Many years ago at the Public House, seeking to emulate this loveliness, I'd pull every string to obtain these Belgian glasses for daily use. At times they were free of charge from the wholesaler, and at other times, we paid. My rule was to refrain from selling these glasses as souvenirs if they hadn't cost us anything. If we paid for them, maybe.

This didn't stop customers from pilfering glasses, as described below. The specialty glasses also were far more prone to being broken than imperial pints or shaker pints (apart from ubiquity, one reason the latter became so popular during the "craft" revolution is their thick impermeability to shattering).

At the Public House, we eventually learned two relevant truths.

First, non-specialty glasses aren't special enough to steal without logos. They'll be broken, but they won't walk out the door under a coat or in a purse.

Second, a range of generic Belgian-style (or Bavarian Hefe-Weizen) glasses can be purchased for daily use. They fill the bill for serving within general boundaries of appropriateness.

At out forthcoming pub Pints & Union, the bottle and can selection will include beers that should be served in specialty glasses. I'll try my best to find generic examples of these, and it will work out. After all, it's about the beer, first and foremost.

Meanwhile, get over to Belgium. Once there, enjoy the excellence of the country's many beer-friendly drinking venues -- and get your shoes back when you leave.

Belgian bars put the boot into tourists who steal beer glasses, by Daniel Boffey (The Guardian)

Pubs are finding novel ways to combat illicit glass collectors, with one demanding a shoe as a deposit.

While the beer is famously good in Belgium, for some tourists it would seem the drink itself is not enough. Bars and cafes in the country’s most picturesque cities complain that tens of thousands of their stylish glasses are being lost to souvenir hunters every year. But the purveyors of Belgium’s most famous cultural artefact are fighting back, in some unorthodox ways.