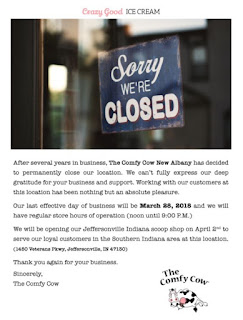 Comfy Cow's last day of business is today. It's hard to determine which "closing soon" rumor began making the rounds first, Comfy Cow or Feast, and it no longer matters. Business decisions are business decisions, and the globe keeps spinning.

But: Are we to discern a worrisome trend?

No; at least not yet.

However, and you can call it what you will, a food and drink shift (or adjustment, or rationalization) obviously is underway downtown as April approaches. As with "craft" beer, the bubble isn't bursting, but the landscape is being reformatted.

Yesterday over at Everything Tom May, Danielle Grady conducted post-mortems for Feast and the Glass Gypsy, a shop at Underground Station. Steve Resch's viewpoint hits the center of the target, at least to me.

... (Feast BBQ owner Ryan) Rogers declined to comment further when the News and Tribune reached out, but developer Steve Resch, who renovated Feast’s building and sold it to Rogers, said that the restaurant was doing well.

"They closed that because they want to concentrate on the Louisville market,” he said. “Feast was still profitable" ...

... Resch sold Rogers the Feast building two years ago, the developer said. When Resch bought the structure in 2010, it had been vacant since the mid-1980s. He renovated it, just like he’s done with the current Wick’s Pizza, Bella Roma, Bank Street Brewhouse, Gospel Bird, Theatreworks of SoIn and Hull & High Water buildings.

While some Southern Indiana businesses are closing, Resch believes that the area and its restaurant scene are still thriving. Another developer, Matt Chalfant is working on a building that will soon be home to a restaurant from the owner of The Exchange, Longboard’s Taco & Tiki. Resch is also renovating an old bar along Market Street that will become Pints & Union, a United Kingdom-inspired pub.