All hail Pinocchio: The Liz Watson campaign says it has a huge lead, based on tiny polling numbers.

Ever since I saw the Liz Watson yard sign illegally placed right there in the verge by Pinocchio Rosenbarger's house, it has seemed likelier than ever that in the ongoing congressional case of Watson v. Canon, the Bloomingtonian is the preference of the local Democratic Party's tightly scripted establishment. 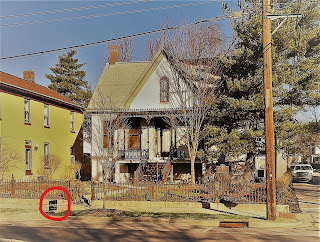 The parallels with goings-on in the national party are fairly obvious, and I needn't repeat the tired litany.

And, a poll of 400 voters, among them 33% undecided, isn't very much of a damning verdict apart from serving as campaign hype generator.

So it goes (insert yawn here).

I've no issues with Watson, but my preference remains elsewhere. Knowing that Pinocchio's nose knows Dickeyformity is a nudge, to be sure, but I have these other fish yet to fry.

Until they are, I remain a passive observer.

Bloomington, IN -- On Tuesday, the Liz for Indiana campaign released poll numbers that show Liz Watson with a 13-point lead over Dan Canon in the Democratic primary to replace Trey Hollingsworth in November. 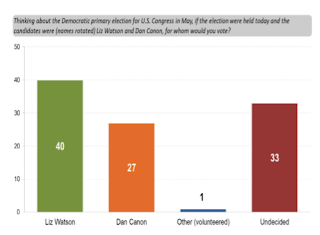 “This poll proves what we already know. Democrats are ready to vote for Liz in May, and they see Liz as the best candidate to take on Trey Hollingsworth in November,” said Brian Peters, Campaign Manager for the Liz for Indiana campaign.

The poll, together with Liz’s support from 27 labor unions and a slew of progressive organizations, as well as the campaign’s $165K cash on hand lead over the rest of the field combined, shows a commanding advantage in the May 8 primary.

“Not only do the poll numbers show our campaign with a large lead, but we also have the resources to get Liz’s message out to every voter in this district. That is a good thing, because they like what they’re hearing.”

The poll was conducted by Greenberg Quinlan Rosner Research in the field from March 3-5 and sampled over 400 Democratic primary voters.

I certainly don't have access to the poll itself, but a poll of 400 usually has an MOE (margin of error) of about 5%. A slightly more accurate poll of 800 gives you a 3% MOE and 1,000 gives you an MOE of about 2%. You can't say the polling numbers are "tiny." That's simply wrong. There are diminishing returns from polling more people.

Now, if you have information that the poll was improperly designed, let's talk.

Polls are B. S.
But do war chest speak volumes?
Is Trey beatable in his second term?