Granted, clogging our streets with charitable donation bucket brigades MIGHT slow traffic, but it would be UNSAFE to bet on it. 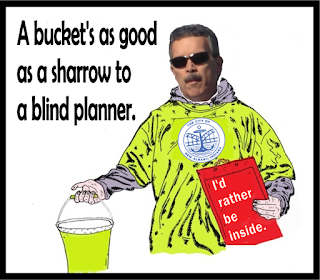 Noting in advance that my 3rd district council representative Greg Phipps is absolutely correct in expressing disgust with the solar-powered Nothing Doing Machines, as erected by planners who never walk, for the ostensible purpose of helping pedestrians cross the street, here's the rough paraphrase of a conversation he and I had following Thursday evening's soul-crushing student city council meeting.

Me: We need to talk about the street grid.

Greg: I know you have issues, but look, at times you have to compromise, and it's better than it was before. It's a start.

Me: Okay, for the sake of argument, let's say it is better than before. It can still be improved, so we need to talk about the next phases for improvement.

Greg: Well, you know, probably nothing else is ever going to happen.

As reported earlier, council devoted thirty minutes to a discussion of potential ways to alter the body's own previous legislation in 2013 to ban non-profits, little leaguers, knitting circles and Dishevel New Albany from sending volunteers wading out into the street to solicit donations from road-enraged drivers at major  intersections.

Back in 2013, when Dan Coffey lobbied furiously in favor of this ban (now he's caterwauling just as frenetically against it), the major point in its favor was safety:

Actually there's a far better argument, one so obvious that even Bob Caesar grasps a shard of it, in that if non-profits can't come up with any better way to raise money than shaming distracted drivers, maybe they need to rethink their entire existence.

Last Thursday night, the discussion got predictably weird when Phipps suggested that in the aftermath of the two-way grid project's completion, and the addition of turn lanes at those major intersections preferred by city-sanctioned panhandlers, it is more dangerous for bucket brigades in 2018 than it was in 2013, to which Coffey turned on this lazy fastball down the middle of the chute and correctly replied, paraphrased:

But if the grid project actually has slowed traffic and improved matters for the pedestrians like you say it has, wouldn't collecting donations be safer, not more dangerous?

Yes, it was THAT kind of night. Here's a series at Strong Towns, which I'll introduce with this passage, substituting Our Town for Wichita):

In cities where Vision Zero has worked, the public sector has shown dedication to reorienting its departments away from the traditional, siloed approach toward a collaborative, multi-disciplinary approach to streets that involve traffic engineers, police and fire departments, elected officials, public health professionals, and the community from the very outset of streets projects — extending this collaboration to community-wide planning for safe streets.

In New Albany, we must change our conception of streets simply as conduits to move cars as efficiently as possible to places that enhance the health, wealth, and safety of all New Albanians.

In successful cities, streets are for people.


A New Vision for our Streets: Part 1, Part 2 and Part 3 by Alex Pemberton

A completely preventable traffic death shows us how street design makes our cities unsafe, and how simple adjustments could change that.
Posted by The New Albanian at 3/19/2018 09:07:00 AM