Unfortunately, yes: "Driverless cars will be allowed to kill us, because capitalism is a death cult."

It's probably bad etiquette to reprint the whole post, and I do this very seldom, but just this once.

Speed kills, and the author leads off with an important point: while mainstream news coverage emphasized that the "driverless" Uber was traveling more slowly than the posted speed limit, it was moving plenty fast enough -- around 40 mph -- to kill a pedestrian 60% of the time.

Keep this number in mind.

Later this spring when the weather is warmer, I'll be taking the radar gun to NA's "improved" street grid, where two-way friction is being credited for slower speeds. My prediction: we'll see that average speeds still fall between 35 and 40 mph ... or, that very same hazardous 60-percentile.

Then we'll have further proof (as if it were needed) that it isn't Al Knable spinning the deceptive yarns.

Driverless Cars Will Be Allowed to Kill Us, Because Capitalism Is A Death Cult (Rebel Metropolis)

As you likely already know, last week a ‘driverless’ Uber test vehicle made by Volvo struck and killed 49 year old Elaine Herzberg while she was walking her bike across a road in Tempe, Arizona.

The vehicle was traveling at a rate of speed that guarantees a 60+% fatality rate when striking pedestrians. The Uber’s autonomous vehicle (AV) didn’t swerve, it didn’t brake. The so-called “safety” driver on board wasn’t even watching the road.

The myth that driverless cars will solve the bad driving habits of humans also died last week. What we’ve learned since then has confirmed some of our worst fears about AV’s.

Some of the blame rests solely on Uber. The anti-union, anti-worker company wasn’t using trained test drivers who should be working in pairs, they were using a solo ‘safety’ driver with a proven record of driving unsafely. Some have also speculated the Volvo’s built-in sensor-based autonomous braking system might have spared the woman’s life…had Uber not disabled it.

More alarming is the frequency that ‘safety’ drivers have had to override when an AV glitches, gets confused, and almost has a collision while moving at speed: on average about every 15 minutes.

But maybe most terrifying is that driverless cars will almost never swerve to avoid an impact, instead relying on braking alone. 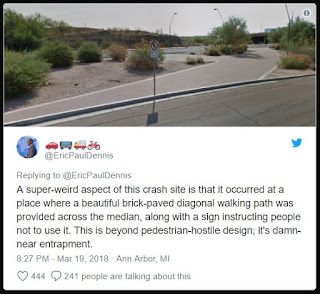 @EricPaulDennis: "A super-weird aspect of this crash site is that it occurred at a place where a beautiful brick-paved diagonal walking path was provided across the median, along with a sign instructing people not to use it. This is beyond pedestrian-hostile design; it's damn-near entrapment."

Now I don’t know about you, but back in my driving days I almost never avoided a collision solely by braking, especially with the number of nocturnal whitetail deer over-populating the Mid West.

Armed with expensive sensory arrays alleged to see better than humans can, the Uber AV failed to see a woman crossing the street with a bike directly in front of it. A professional programmer I know familiar with Uber’s design said the current radar & lidar systems cannot see anything better at night than the human eye, and still rely on reflectivity of an object similar to our visual spectrum.

Even with an infrared FLIR system like what police and military use at night, a computer must process all its visual data in real time while moving at speed, calculate all the variables, then react accordingly – a feat now apparently nowhere close to being logistical reality.

And it’s not as though there was any demand from consumers for such a costly, dangerous street experiment in the first place.

So the question must be asked, why is the auto industry doing this?

From the NYTimes: “Tech companies like Uber, Waymo and Lyft, as well as automakers like General Motors and Toyota, have spent billions developing self-driving cars in the belief that the market for them could one day be worth trillions of dollars.”

As many know who read this blog, the car industry has been bleeding young customers for over a decade. The kids want bikes, they want transit, they want social connection. They do not want to sit in congested freeways like their boomer parents before them.

So the auto industry has been desperately grasping at straws to reinvent the wheel to appeal to a market that simply doesn’t exist, and likely never will. 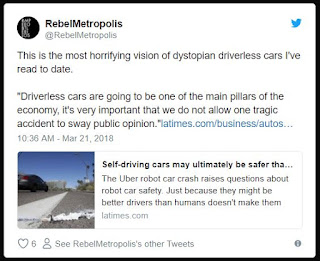 @RebelMetropolis: "This is the most horrifying vision of dystopian driverless cars I've read to date."

"Driverless cars are going to be one of the main pillars of the economy, it's very important that we do not allow one tragic accident to sway public opinion."

But capitalism has never been about responding to actual market demand. It has always been about extracting wealth from labor, creating monopolies, and lying to consumers about the things they supposedly cannot live without.

The irony, of course, is that the initial roll-out of the automobile a century ago was horrifically deadly. It’s been noted that so little attention is given to regular cases of homicide-by-automobile. To be sure, prior to Elaine Herzberg’s tragic death, 10 other pedestrians were killed by cars on the streets of Phoenix in just one week.

It’s good that we’re shocked by this now, we need to be. Because the scumbag industry lobbyists and the techie bros trying to convince us this new Titanic is unsinkable, they’re going to keep forcing driverless cars down our throats for the sake of profit.

Alex Roy wrote a lengthy class-concious indictment of Uber and driverless cars for TheDrive.com where he asked the most important question of all, “How many more people do self-driving cars have to kill before we have common sense regulation? A society that tolerates 40,000 deaths a year due to human driving will probably put up with a lot more collateral damage, as long as the dead are car-less, or better yet homeless. In this country, that’s practically the same thing.”

The capitalists are dumping billions into technology to do something totally unnecessary, that most can do with a vehicle that uses tech 200 years old. We need to stop these arrogant technocrats who’ve made clear their willingness to put profit over people.