If you live OUTSIDE New Albany, this trend should enthuse you: "Is Mayor a Dead End Job?" 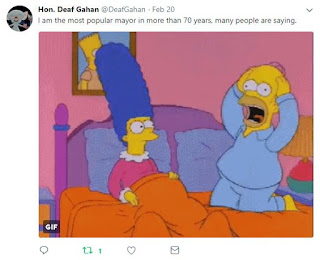 Deaf Gahan may be agoraphobic, but he's also ambitious, and for a while the rumor mill emitted regular signals that he'd seek higher office.

But Deaf hates a contested race against his betters, and the Democratic Party somehow found younger cannon fodder to challenge Ed Clere and Ron Grooms, so it appears New Albany is stuck with the deadendanchorweightgenius of the flood plain, at least until someone defeats Gahan's imposing Elsby-sized sack o' cash.

Let's gather those HazMat suits, and we'll reason together in preparation for 2019, when there'll be one chance in the spring, and if necessary, a second in the fall to return Dear Leader to a purely workmanlike career in veneer.

Is Mayor a Dead End Job? by Aaron Renn (Urbanophile)

We constantly hear that it’s the era of cities. Benjamin Barber wrote a book called If Mayors Ruled the World. Mayors are touted as pragmatic problem solvers who are taking on the challenges politicians at other levels of government are afraid to face.

One would think that if mayors were that much better than state or federal officials, then mayor would be a great stepping stone to higher office. However, that does not appear to be the case ...

... One such young mayor who has gotten huge attention is Pete Buttigieg of South Bend, Indiana.

A bitter irony is at play here: At a moment when the faces of the Democratic Party are 67-year-old Chuck Schumer and 77-year-old Nancy Pelosi, when so many novice Democrats are banging at the gate, spurred into action by powerful social currents and opposition to the president, one of the party’s most talented young politicians has nowhere to go.

Indiana is a red state and mayor hasn’t generally been a great route to higher office. Two Indianapolis mayors after Richard Lugar ran for statewide office and lost. But the pattern is clearly more widespread.

Looking around, you hear about lots of people who’ve acquired the monicker “Mayor for Life,” but not nearly as many former mayors who moved up to higher office at all, much less proven to be dynamos there.