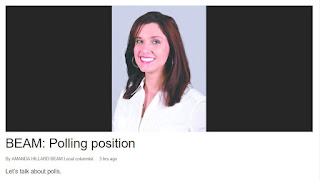 The recent poll generated by Liz Watson's campaign was snapped up with lightning speed by the News and Tribune, elevating just another social media tout redolent of the AdamBot's knee-pants DNC tactics primer to the status of genuine news item. I find this regrettable, given that the newspaper hasn't offered the same freebie to surveys subsequently released by Dan Canon's campaign.

Either both these question-asking efforts are sufficiently reputable for newspaper coverage, or neither. I can't determine why one is, and the other isn't, although it is at least gratifying that management allowed Amanda Beam's excellent column to be published.

The past week has been critical for me in making a final decision about how to vote in May. I've leaned Canon from the start; admittedly, there's a final piece of the puzzle to be pressed into place, and I trust it will.

In the interim, merely remember that when the party establishment is the problem, party establishment candidates push no favorable buttons with me. If you have access to the newspaper's articles, I strongly encourage reading the entire column. Meanwhile, here's the middle section of it.

... Fast forward a few days. I noticed an article on social media that revealed one of the results of the poll I had taken. However, not included was who had commissioned the survey or the questions they asked in the order they had appeared.

Call me crazy — again — but if a campaign paid for a survey I find it difficult to treat the results as valid.

So if you know me and my big mouth, then you would understand I could only do one thing. I spoke up not so eloquently on social media. Citing my own experience with the survey, I questioned who commissioned the poll and, ultimately, its validity.

Sometimes when you ask questions you get great responses. Other times you get insinuations that you are a mindless twit.