One positive aspect of our Trumped-up times is the "discrediting of evangelical Christianity." 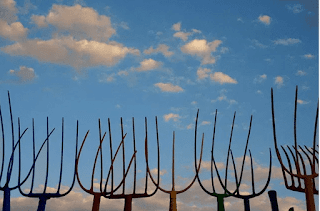 ... Jerry Falwell Jr., cognizant enough of the disjuncture between personal piety and support of Trump but apparently not cognizant enough to avoid uttering inanities like the following, has compared the president to King David. That is to say that he acknowledges Trump’s copious personal failings (and steadfast refusals at contrition for any of them) but sees the president as a tool of the Lord meant to enact Christian policy, and so it behooves evangelicals to support him.

One imagines that whatever makes it easier for the good Rev. Falwell to sleep better at night, but perhaps he is the sort of man whose sleep is untroubled, for hypocrisy has a handy ability to cleanse the conscience.


Whether Trump or the supposedly pious, it's all blowhardism to me.

Why Evangelicals—Still!—Support Trump, by Katha Pollitt (The Nation)

If you leave out the part about him being a corrupt, immoral con man and bully, there’s lots for them to like.

... In the latest issue of The Atlantic, Michael Gerson, a former Bush speechwriter and current Washington Post columnist, mourns the loss of evangelical credibility in an angry, eloquent essay, “The Last Temptation.” As Gerson writes: “The moral convictions of many evangelical leaders have become a function of their partisan identification. This is not mere gullibility; it is utter corruption.” An evangelical himself, Gerson excoriates those leaders who make outlandish excuses for Trump’s behavior (my personal favorite: James Dobson’s explanation that the president is a “baby Christian”). Evangelicals, he says, have been driven to a kind of paranoia by their loss of cultural hegemony: They fall into absurd and unnecessary battles over school prayer and creationism, and losing those battles has made them seem—or actually be—“negative, censorious, and oppositional.”