THE BEER BEAT: Let's review a few headlines, from Louisville (and Indy) Lager to Brimstone Big. 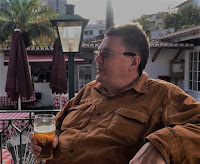 I had a lunch meeting on Friday, and the three of us met at the recently re-refashioned Bank Street Brewhouse for some Taco Steve treats and NABC libations.

Now cast irrevocably as a member of the "former owner" camp, it still feels a bit weird for me to return as a civilian. This said, everything was fine. Taco Steve is impeccable, and the four beer samples all were solid.

Not everyone will agree, but I like what Josh Hill has done with Elector, fattening the malt and to my palate, rebooting a throwback closer to the way it tasted back in 2002 when Michael and Joey first accidentally invented it.

As a side note: Tuesday, March 13 is the ninth anniversary of BSB's opening day in 2009. Today's segue has concluded, and we turn to the latest from the NABC alumni contingent.

Jared Williamson is no slouch. The Indiana native got turned on to brewing while working at New Albanian Brewing Company in New Albany, Indiana in 2005. “One day they finally taught me how to use the keg washer, and the rest is history,” he told STL Beer Bulletin. At NABC, he learned everything from brewing to marketing to distribution to tax and TTB.

As lead brewer at Schlafly, where he’s worked since 2011, Williamson manages operations at both the Taproom and Bottleworks locations. His innovative brews include Schlafly’s Single Malt Scottish Ale, painstakingly blended and aged in Scotch casks, and The Variant, an imperial stout-based beer aged in port barrels. Somehow he also found time to pose for Schlafly’s 2016 Beard Calendar. (Williamson shared an umbrella with fellow brewer and co-Mister April, Charles Stockstrom.)

We caught up with Williamson to learn what he thinks about IPA fads, and how his life motto might just be “drink it fresh.”

Back here in Louisville, it may finally be time to roll out the barrels of lager. I persist in thinking that a firmly hopped, youthful lager with a trendy sheen of haze would do well in these parts. BSB probably has some tank space ...


The year of the lager? by Kevin Gibson (LEO)

... Well-crafted lagers in Louisville have been making a comeback, coming full circle since the dawn of Prohibition. Goodwood Brewing was on the fore of this slowly-moving trend when it brought Louisville Lager to the market a couple of years ago. It was a more flavorful version of the stuff you would normally buy from a vendor at a ballgame.

Recently, in casual conversation, I mentioned the growing lager prevalence in craft beer, to which a friend said, “It’s the year of the lager.”


Goodwood's Louisville Lager is a delicious local example, as is Kyle's Bavarian-style Helles at Mile Wide. This might be an appropriate juncture to tout (yet again) the excellent lagers being brewed at Daredevil in Indianapolis, which will be staging another Indy Lagerfest in May.

Road trip, anyone? I really want to attend this one. Back here in the Ville, Business First recently asked and answered a question.

Adam Watson, one of the owners of Against the Grain Brewery, has seen a steady number of competitors start brewing beer in Louisville since his East Main Street facility opened in 2011. And he welcomes all new brewers to town — with one caveat.

“The only new breweries that I fear are ones that make bad beer,” he said with a laugh.


Weaver's article is lengthy and well researched, and the conclusion? More of them.

Bart Watson, chief economist for the national Brewers Association, said that when craft breweries first started opening in other states, laws in Kentucky and Louisville made it harder for breweries to open here, and then to operate and scale up — like zoning classifications that didn’t account for breweries. That’s likely what caused Louisville and the rest of the state to fall behind the curve.

But now with those laws changing to better accommodate the industry, Louisville is catching up and there’s far more space for the industry to run wild here than say, in Colorado, which has more than 330 breweries.

“It’s been a market that’s lagged behind others, but Louisville has a lot of untapped potential and it’s starting to sort of catch up and meet that potential,” Watson said. “I think the reason that you’re seeing such tremendous growth in Louisville is that it’s a little behind other cities so there’s a little more run room.”


With new age local "craft" beer running amok, all the more reason to slow down and cherish the classic stylistic yardsticks of the past.

After two consecutive years of single-digit sales declines, Sierra Nevada Brewing is refocusing its efforts on selling its flagship Pale Ale while also telling its story to consumers.


Is any of this sounding familiar?

Whitney added that some on-premise wounds have come as decades-old Pale Ale draft placements were swapped out for special release offerings that only lasted until the kegs ran dry. And once they did, competing breweries could more easily commandeer the draft lines.

“[When] you see some of our distributors switch out Pale Ale for a special beer that they think is really exciting, that only stays on tap for a month, it’s like, ‘Wow, you gave up a 20-year-old handle in an account for a feature for the month, and then we lost a 20-year-old account? How can you do that?’” he said. “I think there’s so much emphasis on new that it’s kind of gotten irrational.”

So this year, Sierra Nevada is scaling back its focus on innovation in an effort to refocus on Pale Ale, which accounts for half of the company’s volume, Whitney said. In the process, the company hopes to win back some of those surrendered tap handles and re-engage with consumers on “a deeper, louder level.”


That's right; it's the crazed former brewery owner's (me) basic theory for Pints & Union, and while Sierra Nevada Pale Ale probably won't be among the permanent taps, it should be pouring from a tap somewhere downtown, all of the time.

In closing, an example of classicist beer writing that places narcissistic beer selfie culture in the reeking dumpster with the fish bones, where it belongs. It's a two-decade-old barleywine -- and as a bonus, some fine Belgian-style eating.

This is BIG, by Lew Bryson (Seen Through a Glass)

I know, I know: nothing for years. The blog is dead, long live Twitter.

But you know? Some things deserve more space.

No, literally, look at the label. I was digging in my Beer Fridge today, looking for two bottles of proper beer to make carbonades Flamandes (more on that later) on this disappointing snow day, when I found two bottles of Brimstone Big, a Maryland-brewed barleywine from the 1990s that we cherished back in the day. The brewed date on the label: October 1998.