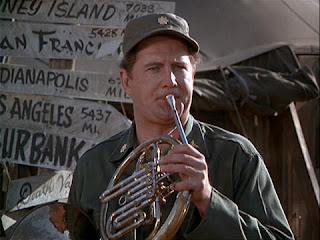 As regular readers know, I'm an unreconstructed fan of the television series M*A*S*H. Two articles by Marc Freeman in The Hollywood Reporter recall David Ogden Stiers, as well as the show's final episode in 1983, and its legacy 35 years later.

Although a role can't define an actor, an actor can define a role. That's what David Ogden Stiers did with M*A*S*H favorite Major Charles Emerson Winchester III. Stiers and the CBS drama's writers created a brilliant surgeon with a rather aloof disposition whose talent and education made him a worthy adversary to Alan Alda's "Hawkeye" Pierce and Mike Farrell's B.J. Hunnicutt, a stark contrast to the buffoonery and prickly nature of Larry Linville's Frank Burns. Stiers died Saturday after a battle with bladder cancer.


Stiers' testimony is missing from Freeman's earlier piece, undoubtedly owing to the gravity of his illness.

'M*A*S*H' Finale, 35 Years Later: Untold Stories of One of TV's Most Important Shows.

Thirty-five years after ending its 11-season run, the cast and creators behind the CBS military comedy look back on one of the most beloved shows in TV history.

Feb. 28, 1983, represents a watershed moment in the history of American pop culture. On that night, the nation seemingly shut down to watch the final episode of CBS' groundbreaking military comedy M*A*S*H. The series would wrap its 11-season run with a two-hour finale that would unite 106 million in front of their TV screens with the same purpose: to say goodbye to what had become a family of overfatigued doctors and nurses.

When the series launched in September 1972, CBS executives thought they had greenlighted a comedy. Series creators Gene Reynolds and Larry Gelbart instead gave the network seriocomic vignettes of universal truths about the human condition. "We helped break the boundaries of the boss coming to dinner and burning the roast," series star Alan Alda (aka Benjamin Franklin "Hawkeye" Pierce) tells The Hollywood Reporter.

Viewers laughed at the characters' antics in Rosie's bar or The Swamp with Hawkeye, nestled in his purple robe, the color of royalty. They mourned losses in the operating room, sensed how tightly Radar (Gary Burghoff) clung to his teddy bear at night, and felt Maxwell Klinger's (Jamie Farr) pride in his Statue of Liberty outfit and B.J. Hunnicutt's (Mike Farrell) broken heart as he missed his daughter's childhood. Remember Margaret "Hot Lips" Houlihan's (Loretta Swit) shaky first attempt at a joke or when her walled emotions leaked out? Millions saw the fatigue of meatball surgery and exasperation knowing the soldiers they healed would soon return with new wounds or in body bags.

Everyone wanted a part of M*A*S*H. Stars flocked to the set. Prince Charles flirted with the nurses over lunch at the commissary. The Harlem Globetrotters dropped by. You'd be as likely to see Jane Fonda as you would Henry Kissinger waiting in the wings. Years later, Barack Obama would claim to have learned many value lessons from the show.

So, what was M*A*S*H's secret? The dramedy about the trials and tribulations of a Mobile Army Surgical Hospital unit during the Korean War was really a love story. In building the landmark series, its cast and crew forged a bond of love and respect that lives to this day: a love for truth in storytelling, a love for the audience they were entertaining and a love for each other.

In honor of the 35th anniversary of the series finale, THR looks back at the history M*A*S*H — as told by those who built it.