Begging for density -- or, a city council meeting recap for Thursday, March 15, and the case for liquor as proper vaccine. 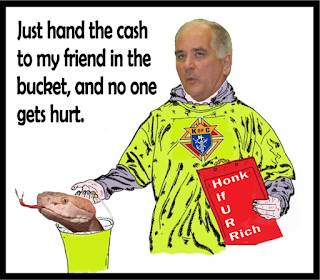 I live in a country that chronically devalues, denigrates and under-funds social services — or, if you will, the safety net.

Then, neglecting to drink the three martinis that might have given me immunity to the inevitable IQ-reduction therapy, I am treated to a city council populated entirely by 50-something white male NAHS graduates undertaking to discuss helping strapped local charities by reviving curbside donations by sanctioned panhandlers bearing buckets, but only the certified organizations, mind you; we wouldn’t want those in need to beg for THEMSELVES, would we?

How gauche, so let’s be sure and make the bucket brigades LOOK as respectable as possible, maybe lanyards, badges and a dress code, then they’ll fleece enough drivers on Calmed! Chaotic! two-way streets (no one can decide which, so enter your biased viewpoint here) to refrain from soaking the taxpayers for social services.

We don’t want it to LOOK bad when these sanctioned organizations like the Salvation Army shake down drivers, or it to LOOK bad for the needy to tend to their own panhandling, or for it to LOOK bad for there to be people in need in the first place, which is why perennial luminaries like Dan Coffey can simultaneously insist there isn’t anywhere near enough affordable housing in NA, then vote against the Mews proposal in his own district, though he flipped and voted for a PUDD development at Daisy & Green Valley (below), all the while insisting that 500 affordable housing units at the New Albany Housing Authority must be abolished.

Meanwhile, ask our nine city council members to define density, and their answers will range from “3” to “33” to “TILT.” The Democrats who wrote the comprehensive plan that stipulated density continue to oppose density, having forgotten to define it exactly in the document they approves.

The banker Blair supports annexing more suburban land when we know it only escalates maintenance costs. Paddy Mac thinks walkers are always to blame in accidents because they don’t know their place, and compares the street grid to the painted striping on a factory floor. Coffey plots a coup to seize municipal power for the K of C; barring that, he'll accept public money to restore the facade.

Barksdale, supposedly a Republican, supports the Mayor (a Democrat) more often than Phipps, one of Gahan’s most dependable yes men.

If I were to predicate my 2019 support for council representatives on a simple pattern of logical consistency from one meeting to the next — from ONE MINUTE to the next -- there’d be no need to even consider voting. I haven’t witnessed so many circular arguments since King Larry walked the earth (one time on a single ordinance requiring three votes, Kochert voted for, against, and abstained), when all I really want to do is to live in a country that values social services without the need to assign non-profit bucket-wielders a Caesar-issue security clearance.

The newspaper's coverage centers on the zoning ordinance. Nothing is said about the "let's make NA great again for non-profits begging in the streets" ordinance adjustment, which ultimately was tabled so Coffey can fine-tune it into a shibboleth he can micro-manage between barbecued bologna campaign backslappers.

NEW ALBANY — A high-end housing development proposed to go near Green Valley Road and East Daisy Lane has been squelched.

The first two readings of an ordinance that would have rezoned 5.1 acres for development failed on a 5-4 vote during New Albany City Council's meeting Thursday night.