THE BEER BEAT: In search of beerways, with side orders of New Albany Social and Thunder is #SoIN. 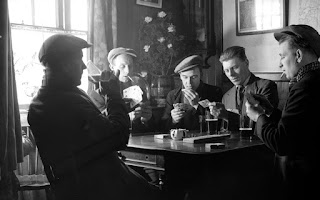 The first time I can recall encountering the word “folkways” was in the early 1970s, somewhere deep within the (then) subterranean audio-visual department of the New Albany-Floyd County Public Library.

Folkways Records was founded in 1948. Led by Moses Asch (1905-1986), Folkways sought to document the entire world of sound. The 2,168 titles Asch released on Folkways include traditional and contemporary music from around the world, spoken word in many languages, and documentary recordings of individuals, communities, and current events.

The term "folkways" was coined in 1906 by the American sociologist William Graham Sumner in his book, Folkways: a study of the sociological importance of usages, manners, customs, mores, and morals.

Folkways are habits of the individual and customs of the society which arise from efforts to satisfy needs …. then they become regulative for succeeding generations and take on the character of a social force.

Much later in life the word “foodways” meandered to my attention.

In social science foodways are the cultural, social, and economic practices relating to the production and consumption of food. Foodways often refers to the intersection of food in culture, traditions, and history.

“Foodways” dates to 1971 and an essay by folklorist Jay Anderson, and my introduction came courtesy of the Southern Foodways Alliance.

In the early 2000s, I contributed to a Southern Foodways Alliance oral history project about legendary Louisville bartenders, with my topic being my acquaintance with the late, great Max Allen, Jr.

Roger Baylor got to know Max when he was working at a liquor store in New Albany, Indiana. Max lived in New Albany and would stop in the store to talk shop with Roger’s boss. Eventually, Roger and Max struck up a friendship. Before getting into the microbrew business with his New Albanian Brew Company, Roger was affiliated with the local Home Brew Club. Max was a member, too, and over the years, Roger came to know the man behind the bartender.

The point of this digression?

If the Southern Foodways Alliance chose to include documentation about Louisville bartenders, certainly the same notions that preface folkways and foodways also apply to beer, whether as a stand-alone idea or as a subset of either (or both), and yet when I google “beerways,” most of the links that come up are about beer-themed pathways in the sense of scenic highways or bike routes.

I wouldn’t lay claim to startling or innovative insights in this vein, only that "beerways" have been my fascination for a long time, even if not identified as such. Certainly this impulse was solidified, if not impelled outright, by a book I’ve mentioned many times over the years.

Tastes of Paradise: A Social History of Spices, Stimulants and Intoxicants, (written) by the wonderfully named Wolfgang Schivelbusch. He is not a Groucho Marx character from Duck Soup, but a German-born cultural historian operating from a decidedly (Karl) Marxist perspective.

To indulge in drinking beer without ever thinking beer isn’t beer-drinking at all. It’s just swallowing beer, and I didn’t get into better beer merely to swallow or “drink” reservoirs of it, although doing so might be the collateral result of close proximity these past few decades.

Rather, I got into better beer to change the world, or at least as much of the world as I could reach.

Grasp is another matter.

Ideas and the life of the mind are what inspired me to study philosophy and history at college in the first place, and while beerways probably are centered on sociology, a case can be made that they’re firmly cross-disciplinary.

In truth, I’ve never been able to keep various hop varieties straight in my mind, and can’t remember a fermentation temperature if you hold a Lite to my temple. I never homebrewed much, and science doesn’t scratch the itch.

My idea of better beer is tied to the interests that what matters to me – the history, theory, sociology, geography and culture of it. If you want to watch yeast mate under a microscopic eye, marvelous. I’d rather draw political insights from Woody Guthrie or find ways of connecting urban revitalization to the ready availability of Porter.

Beerways ... what a concept. Time permitting, I'll try to expand this perimeter as the Pints & Union pub project continues to evolve.

Now, for a few odds and ends.

What is New Albany Social? A labor of love on the part of an employee of a downtown business.

Welcome to New Albany Social! I am a wife/mom/interior designer who spends too much time on social media. I have worked and loved downtown New Albany since before it was even cool. New Albany changes and grows every day and I hope you join me on my journey discovering all the awesomeness there is in downtown NA!

None of this pertains to beer strictly speaking, although I'd guess there are around 100 actual faucets downtown, most of which are "craft" beers or quality imports. If there are a few spare moments this spring, perhaps I can gather information about them and further Kelly's cause.

Looking ahead to April 21, here's a chance to avoid the epochal garishness of Louisville's annual Kentucky Derby kickoff event, Thunder (and Militarism) over Louisville: Thunder is #SoIN New Albany.

This new event has been, and continues to be, organized by Andrew Nicholson, who works for Hull & High Water.

Maybe this year we won't flee the vicinity seeking shelter from the storm, but just walk downtown and drink a few.

"Thunder is #SoIN New Albany" is the very first event of it is kind!
Seven New Albany Restaurants have partnered together to bring you a brand new experience for "Thunder of Louisville". If you are tired of the same old "Thunder Experience" let us show you what New Albany has to offer!
A ticket to this event will get you a one free appetizer and one free beer/cocktail from each restaurant. Check out what each of us have to offer!
Floyd County Brewing Company will be offering a beer and a Barvarian Pretzel
Gospel Bird, of course, will be doing their already famous "Thunder Thighs" and a cocktail!
Big Four Burgers + Beer NA will be pouring a pint of their "Big Four Brew" and serving a one of a kind slider

NABC Bank Street Brewhouse will be serving two "Tacos Mexicanos" byTaco Steve as well as one of their signature beers!

Hull & High Water will be shaking up their "Crabby Mary" to the mix. It is a Bloody Mary with shrimp, hushpuppies, and a crab claw!

Aladdin's Mediterranean / Middle Eastern Cuisine is baking up their AMAZING Baklava and a glass of wine or coffee.

Not only do you get all of this with your ticket purchase, but you also will receive a tshirt. One with the map of Downtown New Albany and a logo of each participant at their corresponding locations!

We not only want to show off the restaurant side of New Albany, but the retail side as well. We have reached out to several shops and boutiques and they are offering ADDITIONAL DISCOUNTS to anyone wearing one of our "Thunder is #SoIN New Albany" tshirts!

Though we will be announcing more to come, here is a sneak peak of our participants so far!

This year, instead of fighting the crowds of "Thunder Over Louisville" and buying funnel cakes, bubble guns, and beer for $10. Come see what we have to offer in New Albany. Great food, amazing beer, fantastic cocktails, beautiful shops/boutiques, and a feeling like you belong.

Let each shop and restaurant will show you why this year,

A Beer With the Brewer: Monnik’s Scott Hand, by Kevin Gibson (Insider Louisville)