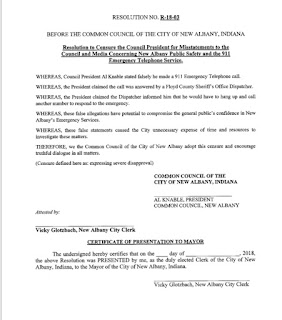 I've witnessed a lot of ridiculous things the past 12 years concerning New Albany city government. This is in the running for the top spot.
-- Mark Cassidy (it's 14 years for me, brother)

Pat McLaughlin couldn’t be bothered to contest Dan Coffey’s myriad bullying behaviors meriting censure, so long as Coffey was voting on the mayor’s side.

It meant nothing to McLaughlin when Bob Caesar, and later the city's corporate counsel Shane Gibson, bluntly refused to disclose the finances of the Bicentennial Commission.

Neither was McLaughlin troubled by his Roadhouse drinking buddy David Duggins’ TASER threats against a public housing resident, nor by the proposed demolition of 500 units of affordable housing, a mayoral putsch undertaken in the tawdriest of fashions, as well as being a move completely opposed to McLaughlin's own political party's purported commitment to working class citizens.

Just details to be ignored, right?

Ah, but now, with two local election cycles approaching, and with his DemoDisneyDixiecratic fraternity on the ropes, Paddy Mac seeks to censure Al Knable for an entirely imagined offense, which is to say, for no other discernible reason than petty politics.

However, McLaughlin's resolution conveniently serves as the most compelling proof yet that Jeff Gahan’s and Adam Dickey’s thuggish monetization organization has completely flipped its lid. Our local Democrats have left the rails, and the only alternative to more of the same is to vote against them at every opportunity. 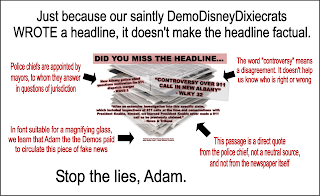 That swamp we keep hearing about? It begins at party chairman Dickey's keyboard, and extends in a steadily escalating stench through the proximity of the party's elected and appointed officials.


The politics of diversion: "Chief Bailey is playing a losing hand, but then, they're not really his cards." But it doesn't have to be this way, and there are ways to make your voice heard now, before voting begins.

The city council meeting is on Monday night, April 2, beginning at 7:00 p.m. Public comments about agenda items occurs at the beginning of the meeting, and you, too, can have your three minutes to comment on the ludicrousness of McLaughlin's resolution, which at its very root is a vicious personal attack on the council president Knable -- and while you may disagree with Knable on certain matters (as I have), I'm guessing you can see the plain intent in this case.

It's knee-capping, it's character assassination, and it's intimidation.

It's Gahanism as gangsterism -- but when it's all they have to offer, they'll use it.

Come out, and be heard -- and please, engage your councilman ... nope, no women, and that's another problem to be resolved at the ballot box, isn't it?