It can't happen here? Kundera's novel and the repressive politics of "normalization" in Red Czechoslovakia. 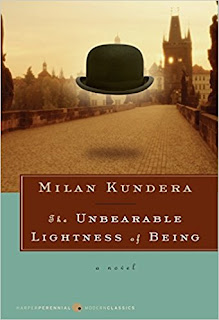 It occurs to me that it has been 30-odd years since my first reading of The Unbearable Lightness of Being, Milan Kundera's renowned novel. It would have occurred in the mid-1980s, prior to my first two visits to then-Communist Czechoslovakia.

The second of these trips came in 1989, as facilitated by my friend Jiří (George), who had recently arrived in New Albany after defecting from Czechoslovakia. I spent a month with his family in Prague and Ostrava, and remain eternally grateful for the opportunity.

Kundera's novel and my friend George intersect because of "normalization," as it was called in Czechoslovakia between the aftermath of the Prague Spring in 1969 and the transformative Velvet Revolution two decades later (and six months after my stay).

Note from the outset that this term is pejorative.

In April 1969 ... the (Gustáv) Husák regime reversed virtually all of the Prague Spring reforms under the guise of “normalization” of political and economic life. Censorship of the press and creative arts was re-imposed, and a bleak period of Czechoslovak history began. Widespread political apathy set in among the population, as most Czechs and Slovaks accepted the modestly improved living standard and availability of consumer goods provided by the regime in exchange for their passive acceptance of the Soviet-dominated rule of the KSČ, which had expelled the members of its former liberal wing. The small number of dissidents, such as Václav Havel, who refused to accept this cynical social contract with the regime were subjected to secret police harassment, expulsion from their professions, assignment to menial jobs, and sometimes arrest and imprisonment. The normalization period lasted throughout the 1970s and 1980s, until the Velvet Revolution of 1989 finally restored a democratic political system in Czechoslovakia.

In Kundera's novel, the successful surgeon Tomáš runs afoul of normalization after authoring a letter critical of the Communist Party, which is published in a radical newspaper. Asked to sign groveling statements recanting his views and expressing loyalty to the USSR as a precondition of resuming his medical career, he chooses instead to abandon his field and become a window washer.

George, who was but a child during the Prague Spring, nonetheless was tagged with a black mark owing to the involvement of family members he barely knew, if at all. Owing to this, he was denied the ability to study the career path of his preference. He came to America penniless and with almost no English, and has since garnered multiple university degrees as an absolute paragon of what the melting pot of immigration is all about.

The point to all this is that the crackdown on dissent in the post-Prague Spring era on the part of the Communist apparatus included the regime's utterly self-defeating tactic of vocational punishment, at times targeted but also random and scattershot.

In short, it was more important to maintain ideological uniformity than to allow a gifted surgeon to do what he had the aptitude for, and had been trained to do, or to reap the societal benefits of permitting an extremely intelligent blue-collar lad from Ostrava to choose his own professional pathway. Had this been the case, George may never have left.

Leave it to the otherwise dull Czechoslovak party apparatchiks to devise a purely Kafkaesque solution to the problem of dissent; you usually wouldn't be run out of town, but forced to remain -- compelled by law to have a job and maintain employment, just not in the field of your proven expertise.

At the same time, signing the proffered apologies was tantamount to "selling out" in the eyes of friends and colleagues, as well as being acts of acquiescent muzzling. You'd be unlikely to protest again, or so the thinking went.