This is the scariest Romeo Langford story you'll ever read. 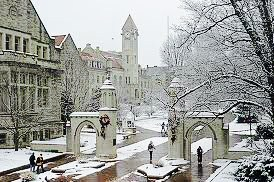 Don't worry, amateur (?) hoops obsessives -- the author delivers "good news" in the sense that he believes Romeo will be attending Indiana University. I'm the only crackpot insisting on knowing what his major will be.

Why Romeo Langford Appears to be Going to Indiana + Senior Year Mix Tape, by Mike Schumann (The Daily Hoosier)

But back to that April visit to Bloomington. It is really one of three things: (1) part of the decision process, (2) a confirmatory visit, or (3) they are making the trip to tell the staff that they are going elsewhere. Which of these, after all this time, seems the most likely to you?


Rather, this passage is the terrifying part.

Tim Langford also stated that the family would like to make the announcement “out in the community“, perhaps with the mayor of New Albany (an IU graduate) involved.


If you'll excuse me, it's time for a shower.

I'd hate to see Langford sully his stellar reputation by indulging the mayor in what would amount to being co-opted as a re-election campaign prop.

As an aside, I'd pick Vandy. As Bluegill dreamed the other day, Romeo could go to Vanderbilt, get an education and then play his way through the top-tier Europe leagues.
Posted by The New Albanian at 3/24/2018 09:01:00 PM

I'll get Roy Blount here if Romeo signs with Vanderbilt. VU graduate. Or Sen. Lamar Alexander, or you pick the VU alum

I am betting on Vandy. I have a stead dinner at Jeff Ruby’s riding on it.