Wealthy blithering idiot David Jones Sr. knows "a pit of mediocrity" when he sees it -- most often in the morning while shaving. 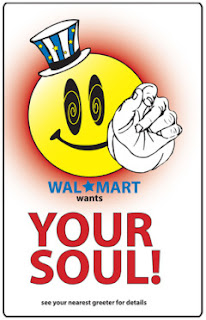 Times like these are when I usually suggest eating the rich, but I’m not sure the vindaloo sauce is strong enough to make the rich remotely palatable. Stewing in Jones' own senility sounds like a better recipe, anyway.

During a speech to the Rotary Club of Louisville, David Jones Sr. blamed “faceless boards,” “so-called preservationists” and “self-appointed busybodies” for killing a proposed Walmart Supercenter at 18th and Broadway.

He also listed the death of the project as a reason he, PNC Bank Regional President Chuck Denny and Tandem PR CEO Sandra Frazier formed the Steering Committee for Action on Louisville’s Agenda (SCALA), which has faced backlash after Insider Louisville revealed its existence.

They “were disappointed that leadership failed to allow Walmart to build a large and greatly needed store on the corner of 18th and Broadway,” said Jones Sr., founder of Humana.

Walmart had planned to build a 154,722-square-foot store with a garden center, deli, pharmacy and optometrist in West Louisville, but the company backed out of the development after a lawsuit was filed by individuals and groups who opposed the design of the Walmart, arguing it did not fit the urban neighborhood. Walmart wanted to build the store back from the street with a 620-space parking lot between the front door and the street, but those who filed the lawsuit wanted it to abut the sidewalk.

“I just can’t tell you how disappointed I was at our lack of capability to allow Walmart. They would have provided 300 jobs, affordable food and other things, but most importantly, hope,” he said. “That disturbed me so much that I said to my friends ‘Why don’t we put together a group and see if there’s any way to get out of this pit of mediocrity.’ ”

Councilwoman Barbara Sexton Smith, D-4, asked Jones Sr. during the Rotary event if he saw hope for the area surrounding 18th and Broadway given that the YMCA of Greater Louisville and Passport Health plan to invest millions of dollars in developments there.

“Not nearly as much hope as I had when the Walmart was going there,” Jones Sr. said.