These useless crosswalk gadgets are Team Gahan's most wasteful expenditure ever -- at least BEFORE the prioritization of a luxury city hall. 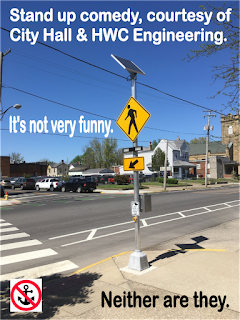 These useless "enhanced" (or "high visibility" -- but please, select your own code words for "this dog won't hunt") crosswalks are such an obvious and profound failure that even 3rd district councilman Greg Phipps grasps it, but because the error was cemented into place by the ruling clique to which Phipps is beholden, there cannot logically be a solution involving the councilman.

This would mean challenging Big Daddy G, and that's a good way to have the AdamBot kneecap your next campaign.

Maybe DNA can hang member advertising placards on them.

Crosswalk safety: Phipps goes on TeeVee; Summers gulps the Kool Aid. Jeff Speck had the street grid answers, but Jeff Gahan urinated on them. Unwalkable New Albany -- what a thrill!

... Focusing on the topic at hand, maybe Phipps is beginning to see that without Jeff Speck's principled approach to comprehensive street grid reform, two-way automotive friction alone cannot magically produce walkability -- and the majority of bicycle-friendly design components never made it past Gahan's ingrained cowardice.

Can you explain, Jeff Gillenwater?

"Greg Phipps and Larry Summers are both very aware that much more could have been done via this significant expenditure to protect against and start reversing auto-centric culture. It’s too bad both of them chose silence as a means of protecting their vaunted personal positions while a solid plan to do just that was being butchered by their boss. As lots of us have mentioned, two-way conversion as implemented is a bare bones step. Now we’ll have to spend years more and lots of additional money working toward eventually getting it right."