This just in: "I urge We Are New Albany supporters to back LaMicra Martin in tomorrow's primary." 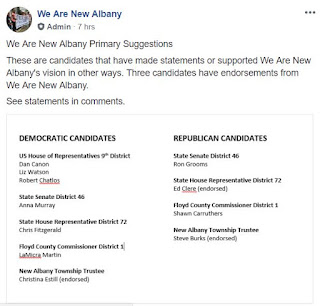 Moments ago, We Are New Albany posted two social media statements. Above is the list of candidates in tomorrow's primary who have made a public statement addressing the future of pubic housing in the wake of Mayor Jeff Gahan's hostile takeover of the New Albany Housing Authority.

These are the campaign financial reports filed by Jeff Gahan and Jason Applegate. They both have several of the same donors, but most notably they both have received donations from John Neace. You may have heard of Mr. Neace. He has worked with the city government in Charlestown to force residents of Pleasant Ridge to sell their homes to Neace through the unlawful use of eminent domain.

Also, Jason Applegate received a sizable campaign donation from NAHA interim executive director, David Duggins, under Public Finance Management, LLC (https://indianadb.com/…/…/public-finance-management-llc.html). Jason has not reached out to We Are New Albany and it's clear that city officials are backing his campaign due to the similarity in donors. I urge We Are New Albany supporters to back LaMicra Martin in tomorrow's primary. Apathy toward public housing residents' concerns is unacceptable and Applegate's acceptance of contributions from questionable donors is unconscionable and disqualifying.


Who knew Duggins had his own campaign finance laundromat?

In fairness to candidate Applegate, we recently chatted by phone, and his position on NAHA was that it's too early to tell one way or another until studies are completed and the board releases its plan for downsizing/rebuilding. This said, WANA is correct, in that the candidate made no public statement of which we're aware.


Another name stands out: Ed Jolliffe of Indianapolis, president of HWC Engineering, who also gave $500 to Applegate -- and $5,000 to Jeff Gahan in the year 2017.

You'll recall that by sheer coincidence, HWC got the contract from the city for the auto-centric two-way street grid design -- and established a branch office for HWC within spitting distance of Gahan's office window. Gahan also was given $5,000 by Neace in 2017.