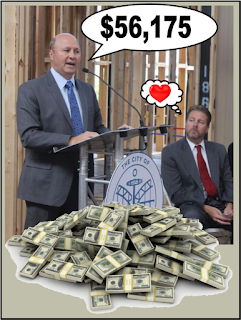 That's a buck and a half for every man, woman and child in New Albany -- and precious little of it actually coming from inside the city proper. This is in addition to what Gahan's campaign had left over from 2011-2016, and what's to come in 2018 and 2019.

The median household income in New Albany is $41,456, meaning that half the household earn more and the other half less.

If you're angry about the power of money in local elections, especially as it comes from corporations elsewhere, then look no further than our own quaint city. Gahan's 2017 form reads like a who's who of companies that have scored lucrative contracts, most often without competitive bidding.

None of it is illegal, and we're not suggesting it is. Rather, it's indicative of a patronage system of meticulously organized beak-wetting built to harvest mountains of cash.

It turns out that Aaron Fairbanks and I both have taken an interest in this esoteric hobby known as Following the Money. As for me, paraphrasing FDR, "Gahan's bootlickers are unanimous in their hate for me — and I welcome their hatred."

Aaron's been taking some flack for digging, especially as it pertains to Jason Applegate's campaign for commissioner. This a diversionary tactic, and the newspaper should consider hiring him as a free-lancer. Alas, perhaps they're busy with Son of Cooking School, or trying to corral a few more column inches for Tom May to colonize.

Their (no, our) loss. This is fun and educational, and I'm interested in widening the search by going through all of Gahan's reports dating back to his first mayoral run, and also from city council members, especially the one typically carrying the mayor's jockstrap.

First, a glance at a big campaign donor from 2017. Aaron leads it off:

September 7, 2017: The News and Tribune report that Denton-Floyd Development received a $2.5 million state tax credit that was matched by the City of New Albany to begin construction on an estimated $15 million "new senior living facility going into the former M. Fine & Sons shirt factory in New Albany."

This is what it looks like when your tax dollars at work are spent buying an election without your consent.


Right here it is.

ON THE AVENUES: Could that be David Duggins paddling across Jeff Gahan's putrid cesspool? On second thought, I'll take the blindfold. 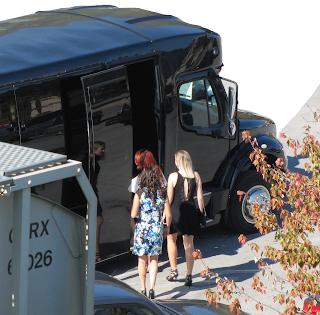 By then, Denton Floyd was engaged in top secret, cloak and dagger negotiations to transform a "neglected" building into a luxury city hall. Now that it's on the verge of approval, the 2018 campaign finance report should be a dilly.

Yesterday, the Green Mouse was told that during an earlier conversation about the Reisz conversion, David Barksdale was asked if there was a point beyond which saving the building would no longer be financially feasible.

How much is too much?

"Whatever it takes," was Barksdale's reply.


As historic preservation wagged the dog last Monday night, one of the Indy suits in attendance was Beau Zoeller of the Frost Brown Todd legal firm. 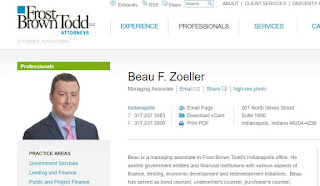 Frost Brown and Todd look to be big donors every year.

Earlier today, it was noted that Clark Dietz's entry couldn't be found. That's because it's the CD PAC listed above.

Just for amusement, I went back to 2015 for a look at CD PAC's tithe to Gahan's re-election campaign: $5k.

Look ahead a year at the other side of the ledger -- where Clark Dietz's beneficiaries donate into the pool of funds, and there's this from local CD workhorse Wes Christmas.

Going back to the 2015 CD Pak report, you'll have noticed that in the address column, the $5,000 donation from Clark Dietz was listed as going to Gahan at Eastridge Drive, the mayor's home.

Oddly, though perhaps not oddly at all, an entirely different $400 donation was made to Jeff Gahan at 210 Lynnwood in Clarksville (the suits misspelled it), which is the address for Public Finance Management LLC, Duggins' own personal tiller.

Freudian skip? The state's info on Public Finance Management is here. An RIP is in order.

If I'm reading correctly, it looks like Duggins dissolved PFM just four days after cutting a check to Applegate.

Man, this is tiring. Don't forget another golden oldie from the Bookseller, circa 2015:

"Show Me the Money" (video): Jeff Gahan's campaign contributors provide a who's who list of buying and selling a city.