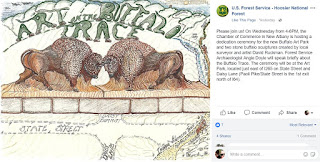 Reporting from a greasy gin mill somewhere near Birdseye, the Green Mouse is stupefied.

Only now does it makes sense -- and you simply can't make up things like this.

At the merchant meeting on Tuesday morning, the city's spokeswoman noted that there'd be a statue dedication on Wednesday at Summit Springs, and while the details eluded her, she'd send the group the info by e-mail.

I expected it to be another monument to Dear Leader, and wasn't contacted, anyway, which isn't unusual because Develop New Albany blacklists NA Confidential.

Now it turns out to have been a Hoosier National Forest event, attributed to a "Chamber of Commerce" New Albany doesn't possess, about the historic migratory route called Buffalo Trace, now drowned in asphalt, down the hill from the atrocious strip mine, at the art park no one knew existed, next to one of the city's busiest and loudest automotive intersections.

Soon it will be hailed as a "bikeable" destination, so expect to see one of Jeff Gahan's frequent campaign donors -- toss a coin -- so why not Allterrain Paving, since it got the bid for the million-plus (or two?) roadway clinging cliffside to the Taco Bell and chain hotels ...

... being paid a few hundred thousand to draw deadly sharrow symbols in chalk under the supervision of Pinocchio Rosenbarger, hovering above six lanes of traffic in an air-conditioned helicopter, nursing a daiquiri, making like Marlon Perkins while Jim Fowler distributes the campaign finance treasure.

Like Grandpa Jones used to say: "In NA, truth is always stranger than fact."

He had no idea. 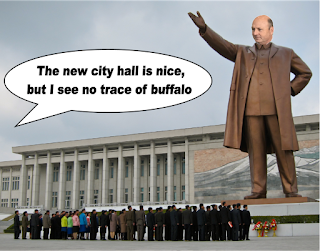