Letter to the editor: "I read your column on the Taco Walk, and the young lady's accompanying essay in full. I have sympathy for her." 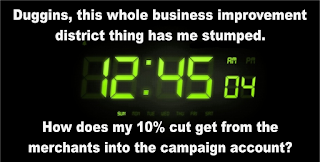 Following is a letter to the editor of NA Confidential authored by Mike Ladd, onetime director of the Urban Enterprise Association.

Ladd knows all too well of which he writes. He was chewed up and spat out by New Albany's perpetually self-interested and wholly unprincipled Democratic Party patronage machine, and it wasn't pretty.

This preparatory link from May 8, 2017 is the place to begin exploring the background of Ladd's experience, with many more articles to be found searching by label at NAC: Mike Ladd.

Jeff Gahan has fired Bob Lane, and if you're wondering how Gahan treats his vanquished enemies ... remember Mike Ladd?

Earlier this evening, Bob Lane was fired as director of the New Albany Housing Authority. It is likely other long-term NAHA employees also will be purged.

It's important to remember that the stealth public housing putsch of 2017 was years in the making, and that it has been authored by Jeff Gahan. The board? Mere groveling sycophants. Gahan owns this, just as he owns his team's jihad and subsequent character assassination against former Urban Enterprise Association director Mike Ladd ... what Nick Cortolillo said in 2012 about Gahan's annexation of the UEA applies just as succinctly now, with the NAHA.

"The city of New Albany wanted unlimited access to the enterprise association’s revenue and Ladd was in the way."

Feeling good about yourselves, Democrats? Apparently Gahan assumes you'll continue to fall over yourselves in the scramble to kiss his ring.


And who was Gahan's designated hit man when Ladd was taken down and City Hall grabbed the UEA for itself?

None other than David "Camorra Envy" Duggins, since installed following the NAHA putsch to orchestrate the mayor's public housing demolition and land grab.

They're just lovely people, aren't they?

I read your column on the Taco Walk, and the young lady's accompanying essay in full. I have sympathy for her.

I underwent the same treatment when we at the Urban Enterprise Association initially worked with the England administration to beautify downtown, and then I found myself battling false claims from Develop New Albany about their "contributions" to the project and how "actively involved" they were in planning, designing and paying for the work.

​At the same time, DNA initiated an active campaign against me personally and the UEA more broadly, claiming I had somehow convinced the UEA board to stop funding DNA and hire me instead. Fact is, I was already the UEA's employee. Truth be told, the UEA did not want to pay for DNA's employee, whom they had doubts about skills-wise. That is why they hired their own employee.

If DNA wanted their own employee they could have had it, IF THEY HAD DEVELOPED FUNDRAISING PROGRAMS that would have paid her salary. Instead, the DNA board wanted us to continue paying for their employee.

The problem here is similar to the Taco Walk problem; they came to see the UEA money as theirs, just as they have laid claim to the Walk. What was that quote from the DNA board member: 'Once you bring something to us, it is ours'? Not exact, but the point remains. Once DNA sinks its claws into something, anything, it becomes theirs; even when it isn't. Everything they touch is corrupted.

Unfortunately, the England administration saw opportunity, and under the cover of wanting to promote "unity," they instead promoted discord.

For all, outward appearances -- maybe in spite of them -- it looks like the community remains the same underneath.