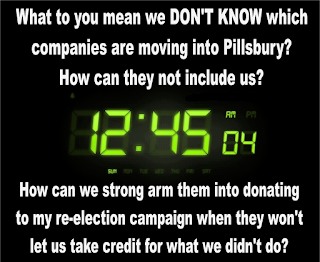 Perhaps a sewer tap-in waiver for the new occupant's executive washroom might do the trick, although someone needs to remind Dear Leader that those New York investment firms have the big bucks because they know when to ignore small-pond shake-downs.

Can't just call them into your office, can you?

The event will be attended by state and local officials, including the Indiana Economic Development Corp.’s president, Elaine Bedel, according to a media advisory. The IEDC often provides incentives for businesses coming to and expanding in Indiana.

The General Mills plant has been empty since 2016 when it closed, putting about 400 people out of work. Later that year, the facility was bought by two New York investment companies: New Mill Capital Holdings and Tiger Capital Group. The new owners have been marketing the property for a buyer ever since.