It's ironic, although not entirely unexpected, that the more beer I drink as part of a solemn imperative to research (alas, someone's got to do it), and the greater the amount of time translating this diligent research into a beer list for Pints & Union, the less opportunity to write idly about beer in general.

It's a lesson I'm relearning. By the way, there is good news: a June local board hearing date for the three-way license. 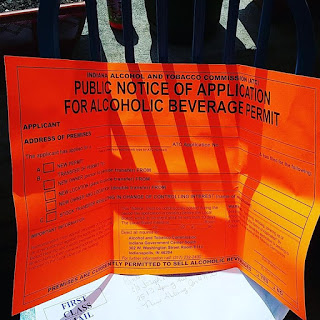 The past few days I've been poring over the pour sheets from four larger wholesalers and two or three smaller ones. That's around 70 pages combined, much of it written in very small print. The range of choice boggles even this fairly experienced mind.

These days an aspiring pub entrepreneur might choose to sell lists made up of imports only, or all domestic; just bottles, or cans alone; beer from California, or Indianapolis; all ales, or exclusively lager; or entirely wood-aged as opposed to fruit-flavored.

One beer we likely won't be selling is Yuengling Golden Pilsner, which I sampled earlier in the week. Frankly, I'm amazed at being informed this beer is all-malt, without the corn grits that are the norm in the brewery's other beers.

Granted, I'm a tad rusty when it comes to beer judging, but to my nose and tongue, that characteristic sweetness seemed a dead giveaway. It reminded me of the last time I was compelled to hold my nose and drink a Miller High Life.

Obviously, Yuengling's house character must owe to other factors, and so it goes. What was I tasting and smelling that might be confused for corn? Anyway, one cannot be right all the time, and I'll add that the second Golden Pilsner was consumed at a near-freezing temperature, and tasted much better as a result.

THE BEER BEAT: Yuengling Golden Pilsner, or how I mourn the taste of corn in the morn (and afternoon).

Getting back to the Pints & Union list, there's no need to go into great detail apart from a reminder that the ultimate intent is a relatively small inventory of bottled and canned "classics" and "greatest hits," not a swirling kaleidoscope. There'll be stylistic diversity, and we'll work seasonal beers and "new" selections into the set list as we go.

As for draft, the ideal plan hasn't changed: eight faucets, five of which are fixed, with two seasonal/specialty rotators and a cider.

Alas. I avoided negative opposition to the Yuengling post. I apologise for misunderstanding your attraction to that flavor as myself and others are relieved by this more recent conveyance on the mattter.