C-FAIR'S Fischer endorsement: "But LGBTQ politics must be about all the things that affect all marginalized people." 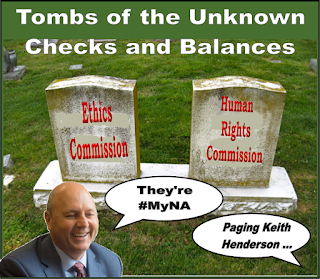 I have to explain to far away friends and relatives that in southern Indiana, it’s the Democrats who are the crooks.
-- NAC reader

Meanwhile in Nawbany, no one can say Mayor Jeff Gahan hasn't been mostly absent when it comes to our city's LGBTQ community.

Minor gestures have sufficed as evidence of commitment in the absence of any single measure requiring Gahan to expend political capital, as when he enabled a reconstituted Human Rights Commission only after hard-wiring it to be toothless.

As of 2018, Gahan refuses to make his appointments to the HRC, without which there can be no meetings; he's probably refraining because with an election year approaching, it cannot be entirely guaranteed that the commission wouldn't be infiltrated by citizens of principle, and direct too much sunlight on the mayor's signature public housing demolitions.

Then again, maybe the well is dry of shameless bootlickers.

In similar fashion, an Ethics Commission that also was erected as Potemkin press release sans legs or arms might currently be examining Gahan's campaign finance windfalls.

New Albany does not possess an organization like the Fairness Campaign to make endorsements, and consequently, NA Confidential cannot speak definitively about our LGBTQ community's perspective on Gahan's reign. However, it can be said that as Gahan's record pertains to intersectional issues ...

Some in the LGBTQ community — including me — question whether Fischer deserved the endorsement, given his stands on intersectional issues — his support of the so-called anti-gang bills, his failure to declare Louisville as a sanctuary city and his focus on economic development while the city’s homeless population grows. They say Fenwick was a better choice because of his progressive platform.

... a list of concerns stretching across a spectrum of topics applies as accurately to Gahan as Fischer, the New Albany mayor's pin-up idol.

Why an LGBTQ endorsement should weigh all issues of social justice, by Deena Lilygren (LEO Weekly)

No one can say Mayor Greg Fischer hasn’t been good for Louisville’s LGBTQ community. Compared to LGBTQ life in Kentucky outside the city, we have an embarrassment of riches: Under his leadership, Louisville is one of the only Southern cities to extend domestic partner benefits to city employees and ahead of the Supreme Court ruling on marriage equality. It has earned a perfect score from the Human Rights Commission for the past three years — outperforming peer cities. Then, there are the emotional benefits we reap from living in a city with an openly pro-fairness mayor.

These accomplishments came about through a close partnership with the Fairness Campaign, an LGBTQ advocacy group that works with cities to enact fairness, or non-discrimination, ordinances. Fairness makes political endorsements through C-FAIR, a political action committee.

This year, the endorsement went to Fischer, not his Democratic opponent, lawyer Ryan Fenwick, the first openly gay mayoral candidate.

Some in the LGBTQ community — including me — question whether Fischer deserved the endorsement, given his stands on intersectional issues — his support of the so-called anti-gang bills, his failure to declare Louisville as a sanctuary city and his focus on economic development while the city’s homeless population grows. They say Fenwick was a better choice because of his progressive platform.

More broadly, however, Fischer’s endorsement underscores how LGBTQ organizations — and all social justice organizations — can become entrenched in the establishment that they help, even inadvertently, to maintain the status quo.

But LGBTQ politics must be about all the things that affect all marginalized people.

“C-FAIR routinely declines to endorse exciting, inspiring and truly progressive candidates because it prefers to scratch backs, return political favors, and remain in the good graces of Louisville’s alleged political elite,” said Jaison Gardner, who is 89.3 WFPL “Strange Fruit” podcast co-host, and has served on the Fairness board. “Fairness has endorsed Mayor Fischer despite his anti-black, anti-sanctuary and anti-working class political positions, despite the opportunity to endorse a truly-progressive, openly gay man with justice-minded ideas.”

Nick Conder, who is vice chair of the local Democratic Socialists chapter and gay, pointed to the contradictions of social justice goals with city policies under Fischer’s administration.

Any social justice organization worth knowing about is devoted to intersectionality. The Fairness Campaign includes in its mission statement that “dismantling racism is central to our work,” and “all issues of oppression are linked and can only be addressed by working in coalition.” Also, it wants to work toward a “non-violent, grassroots organizing that empowers individuals and build a social justice movement that creates lasting change.”

Overlay that on several issues that position Fischer to the right of fairness:

— his support of the methane plant in West Louisville, which community residents defeated on the grounds that it was unfair to site an industrial plant in a low-income neighborhood.

— his failure to declare Louisville a sanctuary city, in the face of threats from the Trump administration.

— his support of police Chief Steve Conrad, whose department has failed to effectively cap the epidemics of homicides and heroin use, was helping federal immigration agents and has had officer-involved shootings that call into question its use-of-force policies, in addition to the overtime and Explorer Scout scandals.

— his support of House Bill 169, the so-called anti-gang bill, which other community civil rights activists and groups, including the American Civil Liberties Union, feel will lead to the perpetuation of racial disparity in the criminal justice system.

C-FAIR’s job is to report which candidate most embodies “fairness” values and with that endorsement, provide voters with a tool to vet candidates.

If that tool is broken, then it may be time to do what we’d do with any broken tool: have it mended, repurposed or set out by the curb.