GREEN MOUSE SAYS: The $8.5 million city hall fix is still in, unless David Barksdale is kidnapped by his own presumed political party. 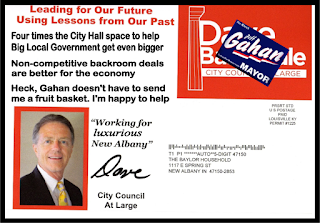 According to the Green Mouse, our ever vigilant Mayor Jeff Gahan (DemoDisneyDixiecrat) has learned that there is an insidious plot among David Barksdale's fellow Republicans to kidnap the $8.5 million councilman and subject him to GOP re-education.

Barksdale is the swing vote in the Reisz luxury city hall measure up for a final vote in July. The Green Mouse's source suggests that Gahan's Gray Ops (no need to insult NFL owners with the word "black") logistics team will provide Barksdale with a temporary identity as "George F. Babbitt," to be sequestered in a Bob Caesar-approved Airbnb until the threat has passed.

In other news, Gahan has vowed that if anything happens to cause the city council vote to go against him, the Reisz building will look like this roughly 12 hours later. 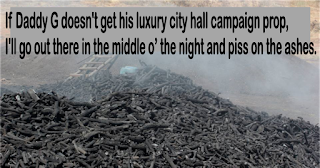 Are we a banana republic yet?

NEW ALBANY — Around 20 people turned out Thursday for an informal public input session on the next phase of the downtown New Albany Reisz Furniture building ...


... The first to speak at the public forum was Councilman Scott Blair, who said the estimated $8.3 million project is too expensive, and the roughly 24,000 square feet at the Reisz building too spacious. City hall now occupies around 6,500 square feet.

“This project, in my opinion, is way too big, way too expensive for the city,” he said. “If you're a family of four, you don't go out and buy a seven-bedroom house.”

Blair suggested the city rent office space in another building, and perhaps offer subsidies to help rehabilitate the Reisz building and get private development in there, which would provide property taxes to the city that would go unrealized if it were used for government offices.

Councilman Dan Coffey said there has been very little finite information offered on the project, and he thinks the 15-year commitment is too big and risky. He added that this could be better as a TIF district than to use EDIT funds for the project, and said he had qualms about Denton-Floyd being the sole group with bidding power.

“This has not been a fair process from day 1,” he said.