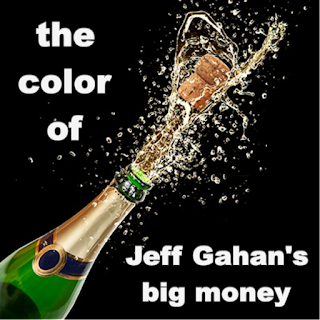 Maybe. The Green Mouse takes what he can get. At the same time, with all the cash changing hands, perhaps Occam's Razor is right, and the simpler answer is better: the joys of public service are a stretch, so it's all about the money.

Since 1998 Harrison has been the owner of the land off IN-111, upon which the impound lot began operations in 2009.

More, recently, when the decade-old coal ash poo hit the fan, Mayor Jeff Gahan promptly utilized Harrison's property as a stage prop in another political grandstand play, in the process indiscriminately blaming his own political party members in county government for polluting a patch -- and under the bus they merrily went, rolling and tumbling.

(Note to Democratic Party members: Even YOU aren't safe from the megalomania. Unless you're called Warren Nash, your turn at the show trial is coming so long as Dear Leader reckons the sacrifice will benefit him.)

From Grace Schneider's CJ coverage about the coal ash disposal:

In late 2008, Floyd’s highway department had a huge black mound at its works yard on Ind. 64 in Georgetown, hauled there for free from University of Louisville Hospital's coal plant near downtown Louisville. In rainy weather, black residue washed off the pile and into a nearby creek, so the county was told to get rid of the stockpile, former highway superintendent Ron Quakenbush said.

A few neighboring counties came and took truckloads, then more went to C.C.E., a contractor grading land on Ind. 111 in New Albany for real estate agent and owner Pat Harrison.


By the way, C.C.E.'s Jeff Eastridge, himself once beset by continuous allegations of polluting, flipped the land for Silver Street Park to NA several years ago. He then hopped aboard Team Gahan's "preferred contractor" list.

Another Gahan campaign donor, Bennett's Towing, obviously services the impound lot along with other wrecker companies.


Ah, but perhaps Bennett's is on the donor list because it occupies desired property adjacent to the future city parks department unit by the river, more land to be taken off the tax rolls, which currently is owned by the heirs of QRC Recycling's founder Tim Janson, who died last year.

This $2.5 million parkland acquisition is supposed to be finalized any day now, and it has been long rumored that the city would use the opportunity to buy out Bennett's, just as long as the overheated bunker printing press keeps churning out Ben Franklins. 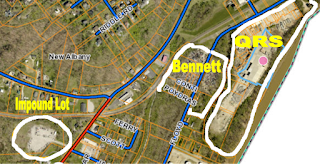 Getting back to coal ash and the impound lot, the Green Mouse reports that Harrison is standing firm in the face of pressure from the county's operatives.

Seems Harrison will not sign the letter Floyd County's legal counsel wants her to sign before they'll clean up the impound lot. They want her to say she knew what was being dumped on her land. But she didn't know. She has a good case and a lawyer. You think they'd be smarter then that.


Given the caliber of the operatives involved in the coal ash disposal operation, whose fictional equivalents worked with Mr. Haney on television's Green Acres, it certainly seems possible that Harrison knew nothing about it.

There's isn't any way of knowing, so let's go back in time to recall a far juicier topic, in March of 2016, when Harrison surprisingly threw her community pillar's weight behind Gahan's tepid rental property registration ordinance.

Given Harrison's past characterization of even the most milquetoast of rental property reform ideas as emanating from Nazi stormtroopers (or as intentionally misspelled, Stromtroopers), the city council gallery was shocked to hear her singing the praises of Dear Leader.

Except perhaps it makes sense, after all. There's this:


And, in addition, nothing further has occurred since 2016 to encourage the alleged second step of inspecting rental properties -- and neither will it, seeing as we're less than a year away from the 2018 primaries. I'd say Harrison lost a battle to win the war.

Gahan's not touching inspections unless the AdamBot comes up with evidence it might further the prospects for his re-election campaign, and the mayor can count on the usual Sycophantic Shuffle, with council members like Phipps and Caesar remaining mum if directed by Big Daddy G.

In retrospect, Harrison's 2016 rental registration arc likely was telegraphed well in advance, and there's no reason to doubt she's reading from Gahan's coal ash script again in 2018, when any conceivable points to be scored by the otherwise environmentally disinterested Gahan will be coming straight from the hide of future mayoral candidate (and current commissioner) Mark Seabrook.

Scoring political points and lubricating them with campaign finance grease?

That's something the Genius of the Flood Plain can really get behind.

March 8, 2016 Analysis: Gahan and the rental ordinance, or the emasculation of the once-powerful Oz.

As time merits, there'll be more to say about last evening's council epic, but for the moment a few plain facts should suffice.

On Monday morning, for the first time in 50 months as mayor, Mayor Jeff Gahan timorously placed a quivering toe in the water, and the minimum required number of chips on the table, and released an awkward statement in support of rental property registration, inspection and enforcement -- something he had studiously avoided mentioning throughout his 2015 campaign for re-election.


Once the council meeting began, shepherds in far-off Patagonia felt the seismic shock when Pat Harrison, inveterate opponent of such intrusive measures, not only endorsed the rental property ordinance and appealed to the many rental owners in the room to unite around it, but refrained from using the word "Gestapo" for the first time in living memory.


The rental owners responded by gazing upon the figure of Harrison much in the fashion of Trump rally attendees when the lone minority protester dares speak apostasy aloud, and set about angrily voicing their perennial objections to being compelled to follow the same general regulations as the remainder of the city's business community.

An hour and a half later, after a brief diversion to New Albany's never-ending stormwater drainage problems (also never mentioned during last year's campaign), it came time for the mayor to speak.

Of course, such was the epochal importance of the occasion -- Gahan referred to the rental ordinance as a "must" --  that the mayor yet again failed to attend, thus missing the chance to confront dissenting property owners face to face, and sending customary surrogate Mike Hall in his stead. Hall read the mayor's statement, which he likely wrote in the first place. Proponents surely felt deflated. If not now, when?
Posted by The New Albanian at 5/29/2018 06:49:00 PM