But hasn't Chuck Freiberger, who was one of three county commissioners at the time of the coal ash dispersal scandal, always been loyal to the local DemoDisneyDixiecratic party machine?

And isn't the city's Facebook page supposed to be devoted to information, not partisan politics?


It transpires that Wile E. Gahan, Genius, is so eager to score political points against current commissioner, future GOP mayoral candidate and next-door neighbor Mark Seabrook that he's (a) deploying the taxpayer-funded city government Facebook feed as a blunt political instrument, and (b) throwing former commissioners Freiberger and Steve Bush under the bus along with Seabrook.

The meme from the mayor's minions doesn't specify which one, so we must assume all of them, right? 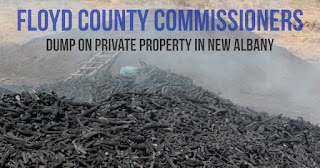 As for Seabrook's candidacy, someone might remind Exalted Leader that he has a party primary to win first — but his opponent(s) next May probably will be targeted as well.

Increasing numbers of observers can see where the biggest lump of toxic but excessively remunerated waste currently resides, this being in Gahan’s third floor bunker.

When Trump does things like this, y'all get angry. Why is it suddenly okay when Gahan indulges his inner thug? 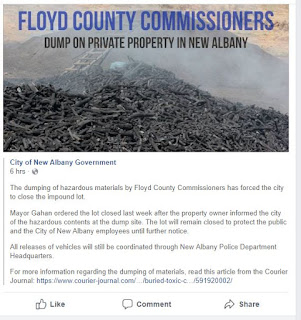 The dumping of hazardous materials by Floyd County Commissioners has forced the city to close the impound lot.

Mayor Gahan ordered the lot closed last week after the property owner informed the city of the hazardous contents at the dump site. The lot will remain closed to protect the public and the City of New Albany employees until further notice.

All releases of vehicles will still be coordinated through New Albany Police Department Headquarters.
Posted by The New Albanian at 5/22/2018 11:06:00 PM