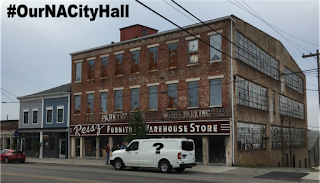 Council Monday: If we're spending $$$ "saving the neglected Reisz Furniture Building to use as a new city hall," then can we be clear as to how it became "neglected" in the first place?


Chris Morris of the Tom May Picayune has by-the-numbers coverage of last evening's council soiree, at which our new anchor-certified city hall took its first inevitable steps toward completion.

Pay close attention to Scott Blair's and Dan Coffey's comments. The council's two independent members distinguished themselves with pointed questions. They followed the money, and should be thanked for doing so.

Council Democrats? They couldn't be bothered.

The usual community pillars want a luxury city hall, and they want it badly, but the curious truth is that the razor-thin 5-4 vote carried only because yet again, quasi-Republican David Barksdale carried Mayor Jeff Gahan's damask jockstrap safely across the finish line.

Next meeting's third reading is a foregone conclusion unless Barksdale is kidnapped and spirited away to Bolivia in the interim.

Yesterday, the Green Mouse was told that during an earlier conversation about the Reisz conversion, Barksdale was asked if there was a point beyond which saving the building would no longer be financially feasible.

How much is too much?

"Whatever it takes," was Barksdale's reply.

For a building. Not human beings and their needs ... but a government building. This no longer qualifies as historic preservation.

It's a fetish, plain and simple.

There's a famous old gag by Jack Benny, whose comic persona was that of miserly skinflint. An armed robber approaches Benny: "Your money or your life."

Stone-faced, Benny turns slowly away from the increasingly impatient robber to look at the audience.

CM Barksdale, here's $570,000 for 15 years. Shall we spend it on people or historic preservation?

He wouldn't have to think it over.

When the vote was concluded, the room abruptly emptied. Seems that community pillars can follow only one topic at a time; let's hope none of them are complaining about potholes, given that paving was the subject of a lengthy discussion after their hurried departure.

In the momentary scrum, Dan Coffey looked at me and said (paraphrased): This is the mayor's project, and he should be here to advocate it. Put that on your web page.

Preaching to the choir, sir, and I already have, but let's repeat it.

Mark my words: In 16 years, or whenever the city is finished renting-to-own the Reisz building -- and assuming the Democratic Party still exists, and is in control -- there'll be a pillar-impelled movement to name it the Jeff Gahan Government Center.

Gahan, a DemoDisneyDixiecrat, who'll campaign against Republican Mark Seabrook in next year's mayoral election, will point early and often to this Reisz rehab historic preservation luxury governance project as a signature achievement of his glorious reign.

AND GAHAN COULD NOT BE BOTHERED TO ATTEND THE CITY COUNCIL MEETING OF MAY 7, 2018.

HE SENT MIKE HALL INSTEAD.

Barksdale did the rest. A couple months back, when asked about his view on the mayor's hostile takeover of public housing, Barksdale -- an at-large council member representing all the city's citizens -- waved away the question.

It's not his area, and there's nothing he can do. He didn't even have to think about it.

NEW ALBANY — The dilapidated Reisz Building, at 148 E. Main St., moved one step closer to having a tenant Monday night after the New Albany City Council approved the first two readings of an ordinance that will turn the structure into a new city hall.

Denton Floyd's proposal would include $5.6 million to renovate the 23,000 square-foot building with construction beginning in July. The plan is to turn the building over to the city in July 2019 ...

... The city currently pays the Building Authority around $200,000 a year for rent of the City-County Building. So the deal will cost the city an additional $375,000 a year for 15 years, something that did not go unnoticed by some council members ...